What is Shrimad Bhagavad Gita?

Shrimad Bhagavad Gita is one of the most important and sacred religious scriptures.  It is the song sung by Lord Krishna. In Hinduism, Vedas are the main scriptures.  At the end of the Vedas, there is a philosophical section called Vedānta.  Shrimad Bhagavad Gita is the essence of Vedānta.  It is philosophy presented in a poetic way.  However, the word Hindu has not been mentioned in any verse in the Bhagavad Gita. Great thinkers like Henry David Thoreau and Ralph Waldo Emerson understood the importance of Gita. It speaks of life on a universal level.

Shrimad Bhagavad Gita is also contained within the great epic scripture, Mahābhārat, when Arjun is filled with distress on the battlefield of Kurukshetra, where a war has been declared between the Kauravas and Pāndavas. Arjun faces the dilemma of encountering his near and dear on the battlefield and becomes despondent.

The Importance of Shrimad Bhagavad Gita

When Arjun becomes despondent, Shri Krishna spreads the nectar of Bhagavad Gita in a divine conversation between Him and Arjun. Through His beloved friend Arjun, Shri Krishna teaches the entire universe the path to wellbeing.

Lord Krishna’s instructions to Arjun have become a guide for all mankind and touch upon all aspects of human life.  Shri Krishna teaches lessons on every angle of human existence and its problems, real and anticipated, in one’s life.  In this divine conversation between Lord Krishna and Arjun, the Lord describes the science of self-realisation and the exact process by which a human being can establish an eternal relationship with God.

Gita is the foundation of all scriptures. This scripture is broken down as follows: 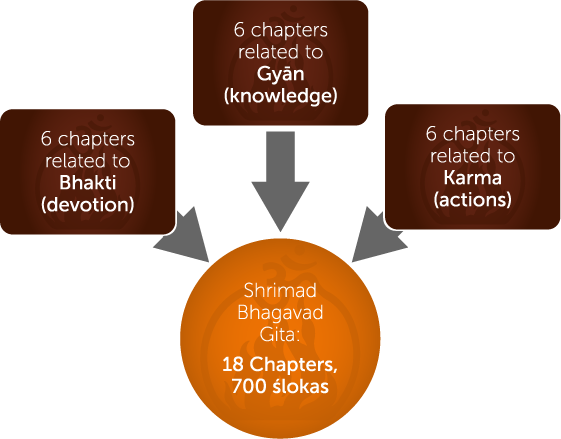 We live in these three chambers/ rooms in life, whether we are rich or poor:

The combination of these three makes our character. 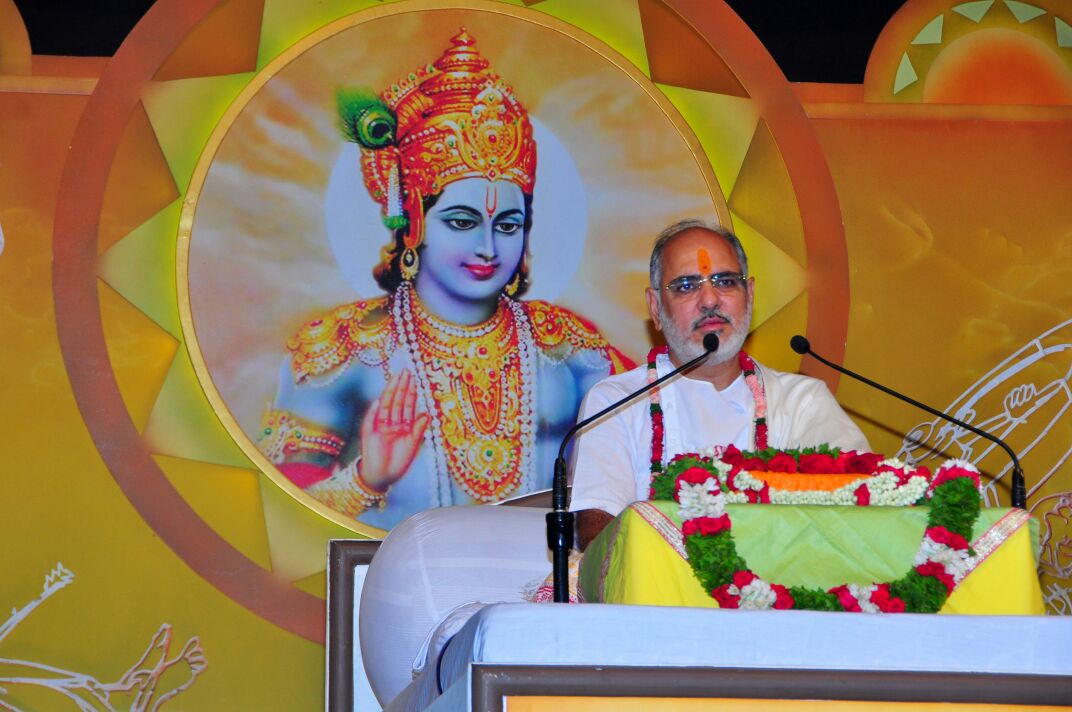 Shrimad Bhagavad Gita discourse by Pujya Bhaishri is normally held for five days. Pujya Bhaishri begins with the importance of Gita in our life and then focuses on one chapter.

Pujya Bhaishri is a scholar of Shrimad Bhagavad Gita and very often quotes ślokas from the Gita even when he narrates Shrimad Bhagavat Katha and Shri Ram Katha. He says that the situation of the battlefield in Bhagavad Gita is replicated in our life. Life is a battlefield in which we fight at every moment. Arjun’s hesitation to pick up his arms is simply the weakness of the mind. This is the condition of Arjun who resides within each one of us.

In the battlefield of life, sometimes there are moments when we are at a complete loss of knowing what we must do. Each one of us has to fight our own war. However, we are not on our own; God is with us. With God as our charioteer holding the five reins of our five horses, meaning senses, He guides us to win our wars. The Lord will not pick up any arms, the battle is our own. God sings this song to rid us of our grief, to teach us our duties and fill our life with bliss, happiness and inner peace. 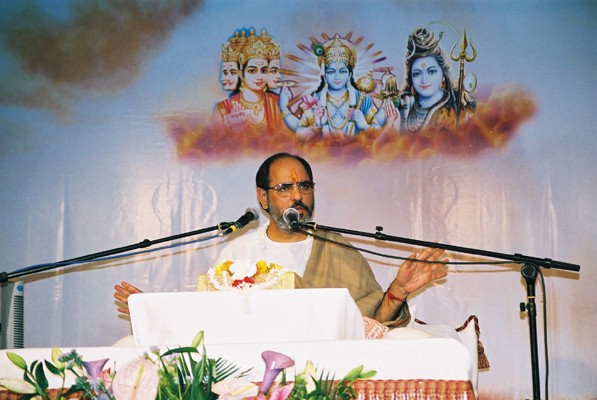