Pujya Bhaishri has been inspirational and supportive in establishing temples and community centres around the world. Pujya Bhaishri is not involved in the day to day running of these temples; he only supports the making of them where requested for guidance.

The Auckland Indian Association built a prayer hall and installed beautiful murtis (idols) of Shri Radha Krishna in 1991 under the inspiration and guidance of Pujya Bhaishri. He along with Pujya Swami Chidanand Saraswatiji conducted the sacred consecration ceremonies. This Radha Krishna Mandir was inaugurated in June 2001. 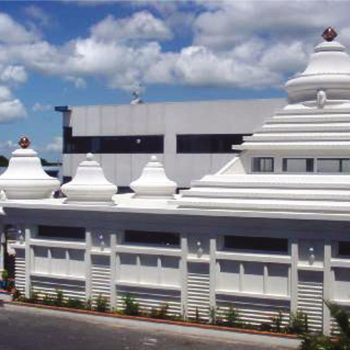 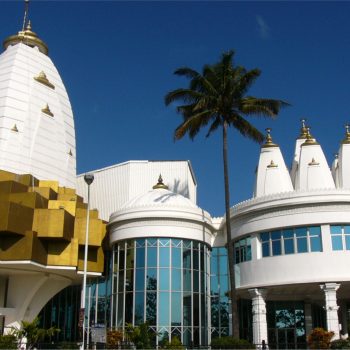 In 1993 Pujya Bhaishri conducted a Shri Ram Katha in Durban, South Africa. He found that in spite of a large Hindu population there was only one temple for the Gujarati community – which was a small rented house known as ‘Saptah Mandir’. He unified all the various divisions of the community such as the Kathiawad Hindu Seva Samaj, Surat Hindu Association, Shree Surat Arya Bhajan Mandal and several other groups into one single group called Shree Gujarati Sanskruti Kendra. He persuaded Kathiawad Hindu Samaj to lend its prime land on a 99-year lease for the construction of a new temple.

Due to the co-operation and involvement of every member of the community, he named the project ‘Ekta Mandir’ – Temple of Unity. By the time the Shri Ram Katha was over, a sum of over three million South African Rands was raised for the project which was completed 8 years later.

A four-day opening festival for the Ekta Mandir began on April 13, 2001. To commemorate the event, a nine day Bhagavat Katha was conducted by Pujya Bhaishri in Durban from 15 – 22 April, 2001.

The temple was built by the ‘Communidade Hindu de Portugal’, an organisation set up in 1982 for the Hindu community in Lisbon. Pujya Bhaishri had conducted a Bhagavat Katha in Lisbon, in support of the temple project in 1991 and had visited the site a number of times over the five-year period of its construction.

The consecration ceremony took place in November 1998 in the presence of Pujya Bhaishri, other saints including Pujya Swami Chidanand Saraswati ji, Pujya Devprasad Bapu, Pujya Karshni Gurusharananandji Maharaj and Pujya Goswami Indirabetiji and the then Portugese President Jorge Sampaio. The event, which was attended by over 3,000 devotees from Lisbon and other parts of Europe, included the installation of the deities: Shri Radha Krishna, Shiv Parivar and Shri Ram Darbar.

President Sampaio later unveiled statues of Mahatma Gandhi and his wife Kasturba in the centre of Lisbon. 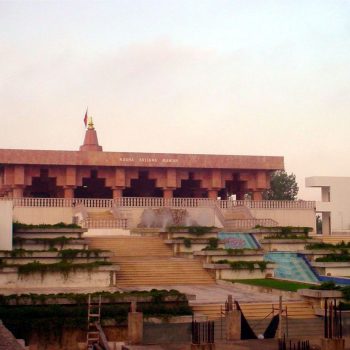 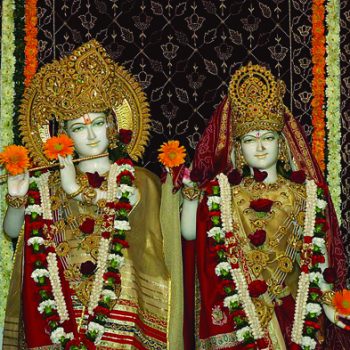 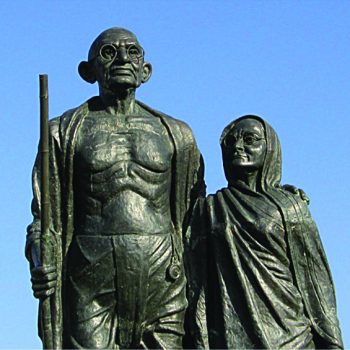 Mahatma Gandhi and Kasturba in the centre of Lisbon, Portugal 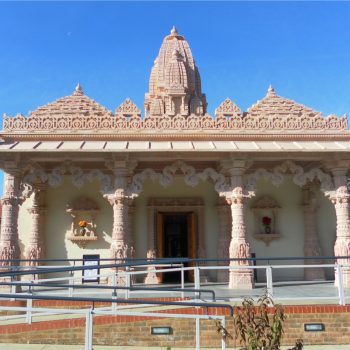 The Crawley Sanatan Mandir was founded by the Gurjar Hindu Union in UK. Although not inspired by Pujya Bhaishri directly, he played a pivotal role in ensuring the completion of the temple project. In 2007, Pujya Bhaishri conducted a Shri Ram Katha in Crawley and two years later, Pujya Bhaishri narrated a Shrimad Bhagavat Katha on the temple grounds, while the temple was still under construction, to help raise funds and gather public support.

The murtis (idols) for the temple were selected under Pujya Bhaishri’s guidance and in May 2010, Pujya Bhaishri conducted the consecration ceremony. Since then, the main priest of the temple has been a graduate RIshikumar from Sandipani Rishikul.

Pujya Bhaishri has also inspired and supported the Ekta Mandir in Dallas, Texas, USA and Bharatiya Ekta Mandir of Arizona in Phoenix, Arizona, USA. These temples have been constructed very carefully and today are a place of worship for many.