All through the entire period of Mahakumbh Parva 2001 Tirthraj Prayag (Allahabad, Uttar Pradesh) was a witness to innumerable events of spiritual importance and significance. However the period between 29th January and 8th February 2001 was of extraordinary significance to the members of the Sanskruti Parivar. During this period, a session of Pujya Bhaishri’s Katha was arranged in the presence of Pujya Guru Sharananandji Maharaj. Though this session had been planned well in advance and its announcement had been made in the Mumbai katha itself, Pujya Bhaishri had second thoughts and wished to cancel it following the devastating earthquake of Gujarat. He had rushed to Kutch and Gujarat immediately after the quake and wanted to stay there longer and organise relief operations. However after conferring with various saints and religious leaders it was decided that the katha should be conducted on schedule and Pujya Bhaishri should proceed to Prayag after commencing relief operations in Ahmedabad and Kutch. Accordingly Pujya Bhaishri reached Prayag on 28th January.

The katha commenced on the auspicious occasion of Vasant Panchami i.e. 29thJanuary. On that day Prayag was literally overflowing with people coming from across the globe for the Shahi Snan (bath) in the Triveni Sangam (confluence of the three holy rivers Ganga, Jamuna and Saraswati). However thanks to the meticulous planning and elaborate arrangements made in Sector-9, the camp of Pujya Guru Sharananandji Maharaj everything went off very smoothly and comfortably. All arrangements of lodging and boarding were excellently organised. Many people who had come to Prayag for Pujya Bapu’s katha stayed back for Bhaishri’s katha also.

On the first two days, Katha sessions were held only in the morning, but on all subsequent days katha sessions were conducted both in the morning as well as the afternoon. At night various programs of Raas-leela, Bhajans and Sankirtans and satsangs of saints and mahatmas were arranged. People were so enchanted and engrossed with the spiritually enriching experiences that they completely lost track of time.

Throughout the entire period of his stay in Prayag, Pujya Bhaishri regularly enquired about the situation in Kutch-Gujarat and monitored the efforts to keep the relief work going smoothly. During the Kumbh snan, Shraddhanjalis (prayer offered to the departed soul) were offered to the people who died in the quake and rituals like pinda-dan, uttara-kriya and tarpana-vidhi were also performed on the Triveni Sangam.

The whole experience of listening to Bhaishri’s katha in the holiest of the holy places i.e. Prayag and that too in the presence of spiritual luminaries like Pujya Guru Sharananandji Maharaj, Pujya Muniji, Param Pujya Jagadguru Shankaracharyaji and countless other renowned saints and mahatmas was a divine experience. In the words of Pujya Bhaishri, only people whom God himself selects get such a rare opportunity. 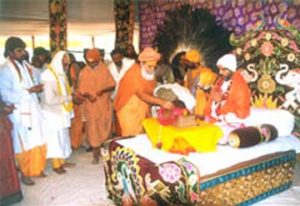