After 12 years, the city of Leicester, UK, heard the divine words of the Srimad Bhagavat when Pujya Bhaishri conducted a 10 day ‘Atma Shanti Katha’ at the famous Rusheymead grounds which commenced on the 12th of July.

Every day crowds of up to 10,000 people gathered to hear the Katha and also to participate in one of the daily Yagnas that took place in the Yagna Shala.

Shanti Dham
The Katha, which was aimed to raise awareness of the Shanti Dham Project, was organised by Bhaarat Sewa Trust and Sanskruti Foundation UK. Shanti Dham proposes to be the first Hindu crematorium in Europe and has already received much support from the local council, ministers and leaders of the Hindu community. The crematorium will be built to cater for the funeral services for Hindus, Sikhs and Jains. It will include a unique feature: a collection of 16 pavilions each representing the 16 main sanskars or sacraments of the Hindu Faith. There will be three main rooms: the preparation room; the crematorium; and the Temple room. The project will hopefully be completed by 2004.

Shobha Yatra
A float was decorated by devotees of the Hare Krishna ISKCON Centre, which carried the Bhagwat Pothi and Bhaishri to the Katha Mandap. Young children dressed in vivid colours as Radha, Krishna and the Gopi’s escorted the float though the streets of Leicester. A procession of hundreds of people followed as everyone chanted and sang kirtans.

Katha grounds
12 days before the Katha began, a special Bhumi Pujan was conduced by the head master of Rusheymead School, Mr Steve White. A Vishnu Sahastranam (1000 names of Lord Vishnu) was also recited by members of the Katha Executive Committee. Apart from the main Katha marquee, that held 10,000 people, there was a food marquee where free Prasad was distributed daily, a Yagna Shala, various commercial stalls, selling murtis, devotional music and paintings, and also various charity stalls that informed the Katha visitors of health issues affecting the Asian community.

During the Katha one morning, Bhaishri visited all the various areas of the grounds, and even helped the team of chefs prepare food for Prasad. That same day, he visited the food marquee and helped served food to many waiting devotees.

Visits by Saints and Dignitaries

Shri Labhshankarbhai Oza, also a Bhagavat Kathakar, attended the entire 10-day event. During one session, Pujya Shri Bhagvatbhai Shastri, the grandson of the Late Shri Krishnashankar Shastri, and the current head of the Bhagvat Vidyapith in Sola, graced the Katha.On the third day of the Katha, Mr Keith Vaz, MP also attended and one behalf of Leicestershire, welcomed Pujya Bhaishri with a garland. The head of the Churches in Leicester city, a representative of the Interfaith Council, and the Head of Police also welcomed Pujya Bhaishri with garlands.

On many occasions, the headmaster of Rusheymead School, Mr Steve White also came to listen. Over the years, Steve White has become familiar with the Gujarati languages. He has adopted the Hindu Faith and has been involved in several projects including ‘Friends of Vrindavan’. On the last day, Steve was renamed as ‘Shiv’ by Pujya Bhaishri for being ‘one that is dear to Krishna.’ Steve ‘Shiv’ White accepted the name and received praise and applause from all those that had attended.

Utsav’s
During the course of the Katha, Krishna-Janma, Govardhan and Rukhmini Vivah Utsav’s were carried out with great pomp and celebration. For the Govardhan Utsav, a model mountain was created adorned with many sweet and savoury dishes. As was expected, the evening of the Govardhan Utsav, the beautiful weather in Leicester changed and it rained all night. Over 12,000 people were present during the Rukmini Vivah, which was followed by a 20-minute firework display.

Snan Yatra
Every year, there is a large Rath Yatra festival that is organised by the Hare Krishna Centre. Prior to the Rath Yatra, there is a ceremony where the deities of Lord Jagannath, Shubhadra and Baldeva are bathed, which is known as the Snan Yatra. This year’s Snan Yatra was held during the Katha in the main Katha mandap. Hundreds of people did darshan and participated in the bathing ceremony and did kirtan for the three-hour programme. The deities were bathed with Panchamrit and various fruit juices.
The Hare Krishna Centre also organised daily parikrama of the mandap in which people participated while chanting and doing kirtan. This was sponsored by the Health Promotion Agency.

Other Activities
On several evenings, after the afternoon discourse, there were special programmes held in main tent, including a classical Bhajan/Sangeet recital by the ‘Sampa School of Music’, which was attended by Bhaishri. Another evening, Chandubhai Mattani and Party held a Bhajan-Kirtan evening that was attended by hundreds of people. Over 1000 people took part in a Raas-Garba evening, which was held by Rameshbhai Patel and Party, and sponsored by the Health Promotion Agency.

Overall it was an enchanted atmosphere which would definitely lead to Atma Shanti. Such was the effect of the divine Katha Ganga that flowed to Leicester. 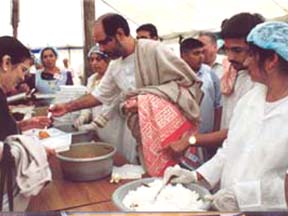 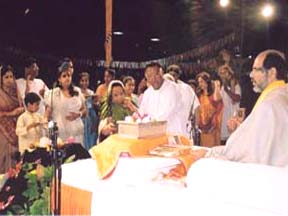 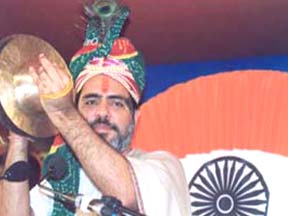 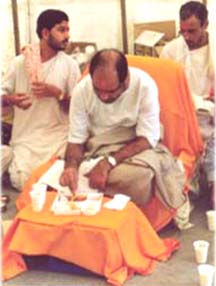 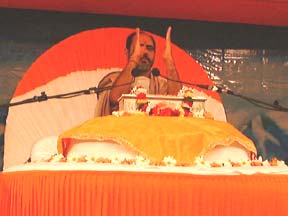 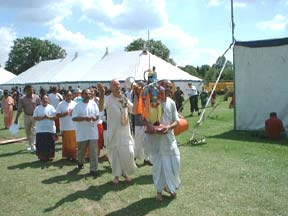 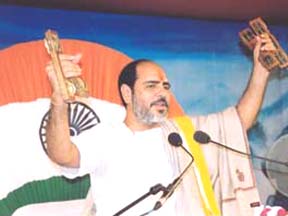