Just like any tirtha sthaan, devotees throng Pandarpur, temples form the skyline and kirtans are beamed loudly on radios but there is one thing different and that is our Pandurang! Yes, a Krishna swaroop, which stands with his hands on his waist, waiting for all his devotees to come to him in his sharan.

The main temple in Pandarpur is that of Vitthalji. He’s called Vitthala or Pandarinath or Pandurang here. The Maharashtrians are his special devotees. A huge temple lacking the usual architectural flair and intricate carvings is seen; but the simplicity of this temple is striking.

The most beautiful aspect of this temple is that it has no restrictions, no bars. Any person irrespective of colour, caste, creed and sex is allowed not only to enter the temple but also to go right upto the murti and touch one’s head to his feet! They call him the common man’s God….! For hours devotees stand in line for darshan and keep chanting a long line of prayer to Vitthalji as if calling him. It goes, ‘Shri Pundareek varda, Shri Namdev, Shri Tukaram ki jai! Shri Vitthala Bhagwan ki jai!’ very similar to how we chant ‘Govinda Govinda’ in Tirupati. Only here they also take the names of the saints Tukaram and Namdev.

Another beautiful aspect of the temple is that 20ft away from the Vitthal murti there are four pillars and one of them is covered with silver. Pujya Bhaishri explained during the katha that it was for embracing the Lord himself! One could put their hands right round the pillar and hug God! They say that Vitthalji’s expressions are different at different times of the day i.e. his bhav changes!

The most celebrated day is ‘Aashaadi ekadashi’ which comes once in a year. Lakhs of devotees throng Pandarpur and stand in line for two whole days for darshan!

A sculpted murti of Rukminiji is housed as well in the temple but 2 kms away from the main temple is one other Rukminiji’s temple. This is a ‘swayambhu’ murti as well and here Rukminiji is in ‘dhyan’ mudra. She looks beautiful. She is sitting as if she’s doing ‘dhyan’ when asked why the Panditji there said whilst Krishna was in Dwarka, one day he went to Satyabhama’s chamber telling Rukminiji that he well return soon. He didn’t, so Rukminiji left Dwarka and came here, on the banks of the river Chandrabhaga and started doing tapasya. Lord Krishna came to take her back but she didn’t break her tapasya. It is whilst waiting for her that he went to visit his devotee, Pundareek. A very simple temple it’s got paintings depicting various episodes from Mahabharat. It was a ‘jagrit sthaan’. The vibrations were very strong.

When God showers his blessings and grace on us, we get an opportunity to visit a place of pilgrimage. And when this shower of grace flows, we get the rare opportunity of meeting holy people and listening to their spiritual sermons in a pilgrim center. Such a rare occasion took place in the holy city of Pandarpur from 5th Jan. to 13th Jan. 2001.

Shri Rameshji Biyani of Sangli and his family organized a katha session of Pujya Bhaishri during this period. Members of Sanskruti Parivar residing in Ichalkaranji, Latur, Sholapur and Pandarpur co-operated whole-heartedly in this auspicious event.

The session began with a shobha yatra from a make shift temple made of grass at the venue of the katha and from there; Shrimad Bhagwat was taken in a procession to the katha mandap. The katha began with the mangalacharan and Pujya Bhaishri narrated the divine leela of the Lord for nine days. The audience listened to the katha with great joy and devotion. A replica of the Vitthal murti in the temple was made on the stage and a huge painting of Vitthalji’s bhav was displayed as one entered the katha mandap.

Pujya Bhaishri would go for darshan of Lord Vitthalji every day, early in the morning, before going to the katha sthala. During one of those days he got an opportunity of performing the morning puja and abhishek of Lord Vitthalnathji. A large number of devotees witnessed this divine occasion.

Pujya Bhaishri also went to partake of the holy waters of river Chandrabhaga and visited the holy places and temples in the surrounding vicinity.

On the 10th of January the devotees witnessed the divine birth of Lord Krishna with great joy and fervour. All through the katha session, Pujya Bhaishri fondly remembered Lord Pandarinath, chanting his name again and again. He advised the people to chant the Lord’s name as often as possible since no other remedy was available to us to save ourselves from the turmoil of Kaliyuga, except the chanting of the Lord’s name.

Pujya Bhaishri further said that through Yoga, Yajna, Japa, Tapa, Vrata etc. were all good and effective but this age of Kaliyuga was not appropriate for those means of attaining the divine. In the Shrimad Bhagwat it has been mentioned “Kalou vada Hari kirtanat.” i. e. by merely chanting the Lord’s name one can attain God. Therefore leave aside all other arduous paths and adopt the easy way of reaching God just by chanting his divine name.

The katha was beautifully organised and a wondrous experience as well, especially because it was in a tirtha sthaan or pilgrim centre like Pandarpur where revered saints like Sant Gyaneshwar, Sant Tukaram, Sant Namdev offered their devotion.

An enrapturing bhajan highlighted the katha

Meri dheeri hai chaal aur patha hai vishaal
My pace is slow, and the path that I tread, so long
Har kadam par musibat hai ab tu sambhal
At every step I face difficulties, now you handle them
Per mere thake hai chale na chale
My feet are tired; they may walk or may not
Mere dil ko ishara tera chahiye
But your loving guidance oh lord, I will always want

Yahan khushiyan hai kam aur zyada hai gam
Here, there are more sorrows and fewer joys
Jahan dekho wahi hai bharam hi bharam
Wherever one looks, it all seems like an illusion
Meri chahat ki duniya base na base
The world may or may not be according to my liking
Mere dil mein basera tera chahiye
Your presence in my heart, my lord, I will always want

A divine katha in a divine place….indeed a divine experience! 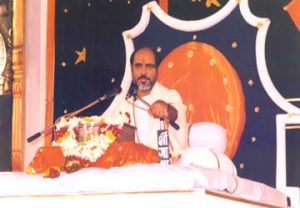 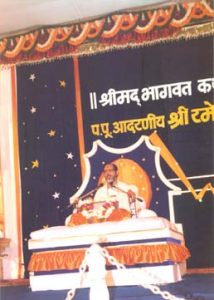 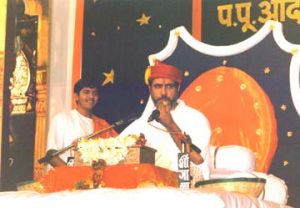 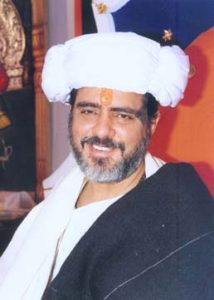 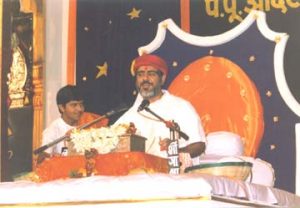 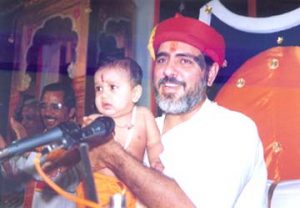