A Bhagwat katha session of Pujya Bhaishri was held at Dungar village of Rajula district, Gujarat between 15th May 2002 and 23rd May 2002 in the holy presence of Pujya Sant Shri Rameshwaranand bapu of Sardhaar and Param Tapasvi Sant Shri Tapasi bapu. The katha session was hosted by Shri Bhupatbhai from whose house the Pothi yatra set out at 3 p. m. on 15th May. A large number of leading Muslim citizens of Dungar village participated whole heartedly in this procession expressing their unity and solidarity with the organizers of the katha. The Pothi yatra reached the katha mandap at 6 p. m. after passing through all important parts of the Dungar village. It was warmly received at the katha venue amidst Vedic chants.

The regular katha began on the morrow of 16th May with lighting of the auspicious lamp by Pujya Sant Shri Rameshwaranandji. The katha was held in two sessions between 9 a.m. to 12 noon and 4 p. m. to 7 p.m. In these sessions Pujya Bhaishri recalled the great literary works of Kavi Shri Kag whose compositions have become a part of popular folk songs of Gujarat -Saurashtra. Pujya Bhaishri recited in his melodious voice the insightful portions of both Kagvani as well as Pingalvani thereby transporting the listeners into a divine and devotional world. Reputed people’s representatives like Shri Bavakubhai Ughada and Shri Dilipbhai Sanghavi also attended the katha sessions and quenched their spiritual thirst.

A series of public utility camps such as eye donation camp, polio camp, etc. were also arranged along with this katha session which was inaugurated by Pujya Bhaishri with the lighting of the lamp. A number of cultural events were also arranged during this katha. The Maruti group of Rajula had arranged the group recitation of Hanuman Chalisa and Sunder Kand at 9 p.m. during this period.

All important festivals such as the Shri Nrisimha avatar, Shri Vaman avatar, Shri Ram janma Shri Krishna janma , Nandotsava, Shri Govardhan utsava, Shri Rukmini vivaha etc. all were celebrated with great joy and festivities. The katha session concluded on the evening of 23rd May 2002 with Pujya Bhaishri’s message of love and goodwill for all. 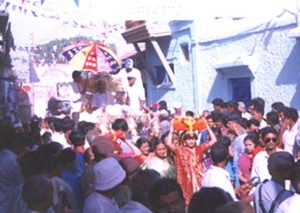 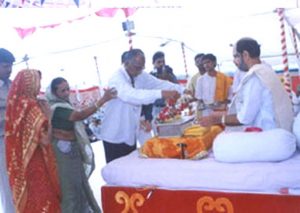 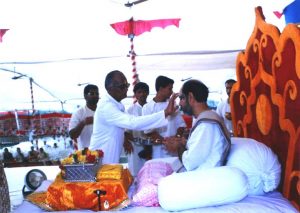 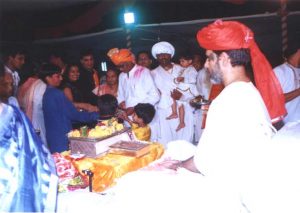