Pujya Bhaishri conducted Bhagwat Gyan Yagna organised by Manav Kalyan Seva Samiti between 27th Feb. and 5th March 2001 at Ujjain, one of the holiest sites of Lord Shiva. This is one of the twelve yotirlings in the country and is also known as ‘Mahakaal’. Other Jyotirlings are Trumbukeshwar, Bhimashankar, Baidnath, Nageshwar, Gunheshwar (near Ajanta/ Ellora caves in Aurangabad), Kashi Vishwanath, Kedarnathji and Pushupatinathji in Kathmandu*, Somnath, Rameshwar, Malikarjun, Mamleshwar and Omkareshwar*, and Mahakaleshwar in Ujjain Combination of these two makes a complete Jyotirling.

The katha was held at the Deshera Grounds of Ujjain and a very large number of devotees had the fortune to drink the Katha Amrit (divine nectar). Pujya Bhaishri mentioned that the recently ended Maha Kumbh at Prayag Raj had attracted the largest congregation of mankind in the world, because of the belief that a few drops of the nectar had splashed into the water of the divine river Ganges. He further explained that Hari Katha is what Demi-Gods wanted to trade for the Divine Nectar to save the life of King Parikshit but Shukdevji Maharaj declined; thus increasing the importance of Bhagwat Katha over the Kumbh.

Bhaishri explained the significance and the importance of the Gurus (teachers) in earlier days, when students used to live with their Gurus in their Ashrams (known as Gurukul) and acquire knowledge without any fee unlike current day school fees. The Guru was not a paid employee but a guide, philosopher and teacher and was very highly regarded by the society, as he was the person that moulded the character of society. Unfortunately in current circumstances, Gurus have become like servants, as they are dependant on others for their livelihood. Earlier students after excelling in their career returned to the Gurukul to teach other students without payment and thus the high ethical standards were perpetuated.

Even Lord Krishna and Sant Sudama had to go to their Guru Sandipani’s Ashram at Ujjain for enlightenment. If we have to restore the old glory in our country it’s vital to give proper recognition to the Teacher; not treated like a paid servant but a highly respected individual; as it is the Guru who maintains the vigil of safeguarding the sanskruti.

Presently our system has been under siege from all directions and we are not even aware of who the enemy is. Our homes have been invaded by the print and mass media inundated with over 45 channels of TV entertainment. This is the cultural war set in the interiors of our homes and needs immediate attention. In the past we were slaves of outside forces and subsequently lost the glory of good old ‘Bharat’ (India) but the ‘flame’ is still there and there is a dire need to rekindle it.

Bhaishri further explained that existence of Jagdish (the Lord of the universe) is possible without ‘Jag’ (the world) but Jag cannot exist without Jagdish. Similarly Dharma can and must be enforced in Politics but Politics must not get involved in Dharma. He explained at length that God takes birth in the form of a human to give humans an opportunity to become God. As such we must do ‘Satkarma’ (good deeds) as guided by the Satguru. One should forget his good deeds and others’ bad actions. One must always remember that God and Death are two most vital things and this fact should always be borne in mind.

Presently one is heavily influenced by maya, which makes one think only for oneself. One needs to balance the art of living. That is why it’s said that Truth is the Darshan of God. There is no need to go to any special place for experiencing the Lord. In reality he is omnipresent, as one can never lose him. He is hidden like butter oil in milk. For lighting a diya, we need to churn and produce butter oil, similarly our Lord is hidden and we need to be awakened and then only he can be manifested. It’s something similar to one’s eyes, which inspite of being an intrinsic part of the physical body can’t be seen, without the help of a mirror.

Pujya Bhaishri said that Katha is not for ‘manoranjan’ (entertainment) but manomanthan (introspection) and one must practise daily satsang. He wished ardently that in the present century Bharat will regain it’s lofty stature as Jagat Guru.

Devotees at the Katha were very much moved by the devastating effects of the earthquake in the state of Gujarat and pledged to work very closely with the Bharatiya Sanskruti Samwardhak Trust (a trust formed and guided by Pujya Bhaishri) in giving relief to their suffering brethren.

On 1st March Pujya Bhaishri went for the darshan of Siddha Kaala Bhairava, the Gana of Lord Mahakaleshwar and also visited the birthplace of graha Mangal deva (Planet Mars).

Pujya Bhaishri did darshan and offered his seva during the Bhasma Aarti of Lord Mahakaleshwar early in the morning on the 2nd. On the 3rd he did darshan of Harsiddhi mataji.

Before departing for Porbandar on the night of 5th March, Bhaishri visited Ashram of Rishi Sandipani, Mahakal, a replica of CharDhams and also various other Sidh Peeths in the vicinity of the city. 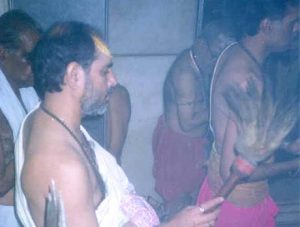 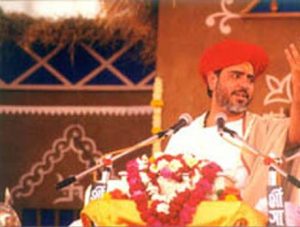 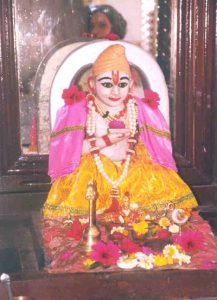 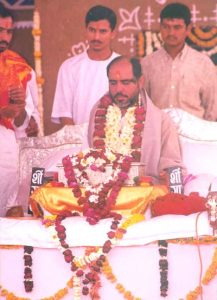 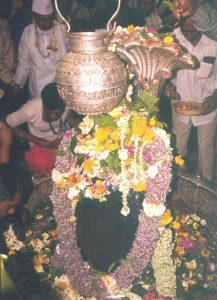