“Braving natural calamities has reinforced the spirit of resilience of the people of Kutch,” said Pujya Bhaishri during the inaugural function of Madhavnagar

“Time and again God has tested the patience and spirit of resilience of the people of Kutch through various natural calamities and each time the Kutchis have done Kutch and themselves proud by displaying exemplary courage and honour thereby earning universal respect and acclaim,” said Pujya Bhaishri whilst speaking at the function of dedicating the reconstructed Madhavnagar village to the people of Khedoi village in the Anjar district of Kutch that was devastated by the quake of 2001.

The reconstruction of Nani Khedoi village was undertaken jointly by Bharatiya Sanskruti Samwardhak Trust, Sanskruti Foundation U.S.A. and Vidya Vikas Charitable Trust, U.S.A. all inspired and founded by Pujya Bhaishri. He further said, “Though it was painful because so many buildings had been destroyed in the quake yet it was also heartening that people did not lose hope and break down. People did not lose hope.” The village of Madhavnagar along with its temple is the first of various reconstruction projects undertaken by the above cited organizations. It has been built at a cost of Rs. 90 lakhs of which each beneficiary has contributed Rs. 30,000/- from their own resources. The Prana pratishtha ceremony of the Radhakrishna temple and Neelkantheshwar Shivalaya was accomplished with Vedic rituals and havan.

Pujya Bhaishri informed that other reconstruction projects undertaken by these organizations include Maharshi Valmiki Samaj Utkarsh Mandir at Madhapar and Baladia villages both in the district on Anjar, Maharshi Sandipani Koli Adivasi Samaj hostel for students at Manphara village in Bhachau district, Maharshi Sandipani Primary School at Kumbharia, Anjar district and Radhanagar, Anjar where a complex of 130 houses are already under construction. He described the work of reconstruction and social upliftment as real devotion and dedication to God, it being true sadhuta and sadhana. He expressed satisfaction at the fact that because the people of Kutch were emotionally and mentally strong they did not despair and take to various vices after the quake. This was seen in Latur and Orissa where in spite of the reconstructive projects of the government and voluntary organizations people became lazy and took to different vices. The inaugural functions of all the above except Radhanagar which is still under construction took place on the 6th and 7th of February. Pujya Bhaishri, trustees and well wishers of the organization were all present and Pujya Shri Devprasadji Bapu of Jamnagar graced the occasions.

Well known educationist and social worker Shri Arjunbhai Kanagad lauded Pujya Bhaishri for recognizing the need for educating the girls of socially backward Ahirs and starting the first ever girl’s school in Kutch. He informed that at present 260 girls are studying in this school. Pujya Anandji Bawa of Jamnagar stressed the need for unity and harmony to benefit from various reconstructive projects inspired by Bhaishri.

The guests who had come all the way from Phoenix and New Jersey, USA, Mumbai, Porbandar, Rajasthan and other cities were welcomed by presenting Kutchi shawl and bouquet. Speaking at the function of Maharshi Sandipani Koli Adivasi hostel in Manphara, Pujya Bhaishri said “Just as the strength of a building enables it to resist the shocks of an earthquake, similarly the strength of character enables people to resist vices and harmful social habits.” He advised the people of Koli caste to keep away from harmful vices like chewing tobacco, smoking and drinking liquor. The local people welcomed Pujya Bhaishri and other guests by offering traditional turbans. 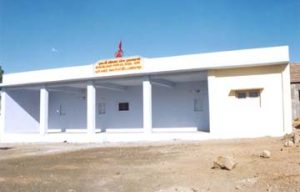 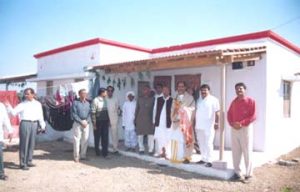 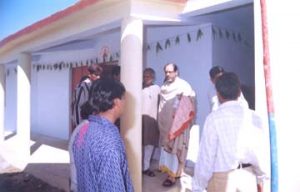 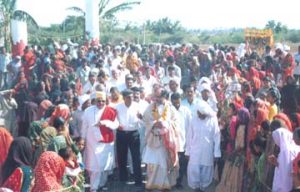