Divine moments of a Divine Katha during Sandipani Mandir Mahotsav

Thousands of devotees flocked to listen to Bhaishri as he recited the katha of Shrimad Bhagavat Puraana as part of the Sandipani Mandir Mahotsav celebrations from 5th to 12th February 2006.

The Shrimad Bhagavat katha, one of the most important and popular scriptures of the Hindu faith, describes the appearance and leelas of Lord Krishna.

One of the main themes of the entire Mahotsav was science and religion, as the ‘Sandipani Science Gallery’ was also launched by His Excellency the President A.P.J. Abdul Kalam earlier in the year. Bhaishri said “We should revive our Bharatiya culture and traditions by building a bridge between science and religion. We want to create such an environment in our country, and this has started.

In his discourses, Bhaishri spoke of many of the problems that exist in society. He said the government should control the level of exposure people get of tobacco through advertising, as this may reduce the use of such harmful products. “As you have come to the katha, you should go only after leaving behind one vyasan (addiction). The body is a temple and Shri Hari resides in this body. Thus, we must keep this body pure at all times.” He added, “If you wish to have an addiction, then have an addiction of Hari bhajan”.

Bhaishri also encouraged the audience to maintain the values and traditions of the villages, not to forget them. He said that where people eat collectively – that is a village, and where people collect and eat – that is a city.

Shri Naval Kishore Sharma, Governor of Gujarat did darshan at Shri Hari Mandir and also attended the katha and paid his respects on the 6th of February 2006.

On the fifth day of the katha, 9th of February, Krishna Janam was celebrated. Also on that day Shri Amitabh Bachchan, Smt. Jaya Bachchan and Shri Abhishek Bachchan joined Shri Anil and Smt. Tina Ambani to visit the ‘Shri Hari Mandir’. They arrived at 1.00 pm and did darshan of the grand and beautiful temple, after which they joined over 125,000 devotees to listen to the katha.

Dressed in traditional clothes, the Bachchan family sat with the Ambanis and listened with great interest to Pujya Bhaishri as he entered the tenth chapter of the Shrimad Bhagavat.

Jaya Bachchan listened with amusement as Pujya Bhaishri elaborated the differences between men and women in a lighter vein as described in the scriptures.

A team of dancers from Tarantar presented colourful Dandia-Raas dance on the occasion, which was witnessed by the Bachchan family. Following this they came to the stage to greet Pujya Bhaishri.

In addition to the Krishna Janma Utsav, other celebrations in the katha included the Govardhan Utsav where 56 varieties of food (chhapan bhog) were offered as ‘Annakut’ to the deities of the Shri Hari Mandir. The food was displayed in 300 plates and over 90,000 devotees did darshan of the Annakut.

A Govardhan parvat was made at the Sandipani Gaushala on the day of the Govardhan Utsav where Pujya Bhaishri and saints did parikrama and puja and devotees thronged to do darshan.

The marriage of Rukmini and Krishna was also celebrated with pomp and festivity.

Bhaishri’s amrit vaani soothed parched throats of thousands desirous to listen to the katha and participate in the Mahotsav. Over 1200 overseas Indians from all over the world and over 5000 Indians from various states of the country stayed at Sandipani Vidyaniketan during the Mahotsav. The Sandipani campus had become a small town itself. Thousands of others stayed in Hotels and guesthouses in the Porbandar city. 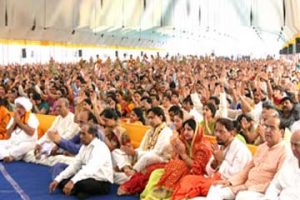 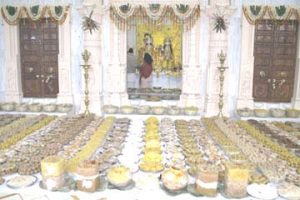 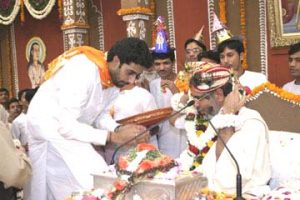 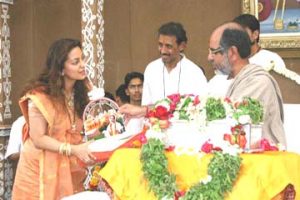 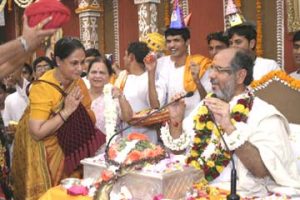 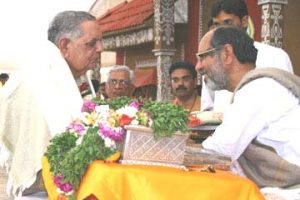