The premier industrialist family in India, Ambanis invited Pujya Bhaishri to conduct a Katha session of Shri Ramacharit Manas from 11th March to 19th March 2001. An aesthetically designed, ambient yet serene looking ‘Bhaktidham’ was set up for this purpose in the courtyard of Sea-wind, Cuffe-parade, Mumbai. Being hosted by a top celebrity family it attracted a large number of dignitaries from the spiritual, business and other walks of life.

Other dignitaries included celebrated business couple Mr. Adi and Mrs. Parmeshwar Godrej, noted thespian and actor, Dilip Kumar was seen deeply impressed and moved by the musical recitals of chopais from Ramacharit Manas. Mr. Amitabh and Mrs. Jaya Bachchan were awed by Bhaishri and personally met him after the Katha and had a few discussions. Also present was celebrity editor Shobha De, Samajwadi Party leader Amarsinghji and others.

On the evening of the 4th day, famous stage personality Shekhar Sen staged his innovative mono-act play Sant Tulsidas that proved to be a deeply moving experience for people devoted to Tulsidasji and Shri Ramacharit Manas. Famous singer Anuradha Paudwal presented a programme of devotional songs on the evening of the eighth day.

Though the Katha sessions were scheduled between 3.30 P.M. to 7.30 P.M., Rishikumars of the Sandipani Vidyaniketan, recited chopais from Ramcharit Manas, and Vedic Mantras during the pre-lunch sessions on all days. Thus from morning to evening all through the Gyan Satra, the residence of Ambanis was filled with deeply devotional and religious intensity.

While narrating the Ram Katha Pujya Bhaishri would give out interesting reflective points which were of immense value to one’s practical life. A random selection of such enlightening thoughts is given below.

There is no birth or death for God, he only manifests and disappears. The supreme Lord has no chance of being lost, as he is omnipresent; he is within us all the time while there is no chance of anyone attaining this world (Sansaar).

He elucidated that a healthy society is one in which people love people and utilize objects, while a society which values objects and utilizes people is a sick society.

Merely listening to the Katha is of no use. What has been heard should be reflected upon and put into practice. What is practiced, that alone is real religion. Katha is not for entertainment but for reflection and contemplation.

Bhaishri further explained that two things are very important in life’s journey; one is continuous movement. The second is movement in the right direction.

He beautifully described the significance behind each of Lord Shiva’s body characteristics and ornaments. The ‘bhasma’ (ash) on his body reminds us that one day our body will turn to ash. The ‘jata’ (twisted matted hair) was symbolic of the ‘janjaal’ (sansaar) in which Ganga (Bhakti) should ever flow. The necklace of skeletons he wears round his neck signifies ‘mahakaal’. He is one who has won over ‘kaal’, destroyer of evil. Another enlightening explanation Bhaishri made during the ‘Swayamvar katha’ where he said that the bow of Lord Shiva is the symbol of ego and the one who breaks it, wins over devotion (Sita).

Bhaishri also said that God’s grace is forever boundless, but it is due to our unending insatiable wants that we become unhappy.

He clarified that the use of arms as per the direction of scriptures ensures real peace in society. The combination of shastra (arms) and shaastra (scriptures) is the combination of strength and devotion. Use of both should be correctly understood.

One of the persons from the audience asked Bhaishri an interesting question. He said, ‘What is Karma? And how can we change our nature (Swabhava)?’

Pujya Bhaiji replied, ‘Kriya and karma are two different things. Kriya is natural. We do not have to make any special effort to do it. But when consciousness imparts a sense of doing to Kriya, it becomes Karma. Kriya does not bind, but Karma leaves its impressions on our consciousness and thus binds the jiva. Karma entails a feeling of paap (sin) and punya (good or pious action). Every Karma leaves an indelible impression. When a large number of such impressions are collected they form our nature (swabhava), which accompanies jiva even after death. The sanchit karma (collected impressions) of previous birth determines the fate or destiny of the jiva in the next birth. It also determines the amount of happiness and suffering that one enjoys or suffers in the next birth. Through suffering the consequences of our past Karma and doing good deeds in our present life we can rectify the consequences of our past misdeeds. ‘Saanidhya’ (company) of holy men (satsang), devotion (Bhakti) and reading religious books helps us in this process.

On conclusion of the Gyan Satra Pujya Bhaishri said that today’s Rishis are in suits and ties. Businessmen and industrialists of our country are the modern day Rishis who are working dedicatedly towards the development and technological improvement of our country, which is one of the prime necessities. He was very pleased with the empowering and phenomenal contribution of the Ambanis and blessed all family members. 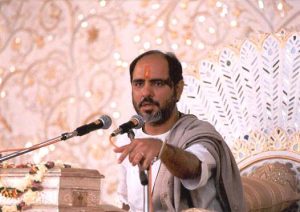 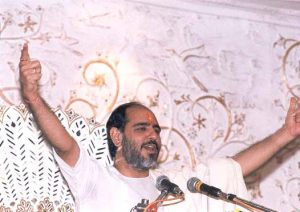 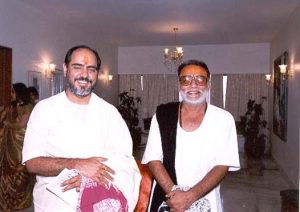 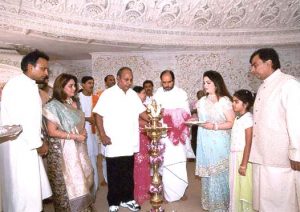 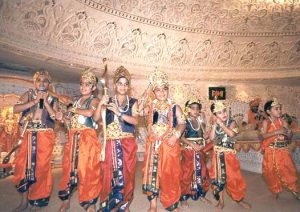 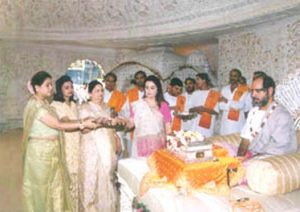