‘Shrimad Bhagwat Katha facilitates spiritual protection, emancipation and spiritual evolution.’ We have heard this fact from Pujya Bhaishri on many occasions. In Ahmedabad Katha we could see it happening right before our eyes.

It is widely recognised that it is much more difficult to rebuild and repair the broken hearts of the people than reconstructing the ruined buildings and structures. Pujya Bhaishri accomplished this difficult task in Ahmedabad with the help of Shrimad Bhagwat Gnan Yagna. This Gnan Yagna was organised by Gujarat Janahit Seva Trust in co-ordination with Sanskruti Parivar (Ahemdabad) and Shri Vallabhacarya Vishwakalyan Trust from 11th February to 18th February 2001. In appreciation of the noble cause, leading religious, social and political dignitaries attended and graced the katha sessions. On the opening day, the holy book of Shrimad Bhagwat was carried in a procession and taken to the venue of the session. Pujya Swami Adhyatmanandji, Shri Bharati Bapu, Shri Durmil Baba of Vadodara, His excellency the Governor of Gujarat, Shri Sundersingh Bhandari and the Mayor of Ahmedabad city graced the inaugural function and appealed to the people to help in reducing the pain and trauma of the quake affected brethren.

As per the wishes of Pujya Bhaishri sermons of renowned saints were arranged in the evenings from 6.30 to 7.00 P.M. to enable the quake-affected people regain their faith and confidence. With the hearts of the people devastated by the quake and the fear of famine looming large on their minds, it was felt that if these people were not consoled and their hurt psyche not suitably healed they would soon lose their faith in God and humanity. It is aptly said in the scriptures and in folk lore that ‘Nahi hote jo sant to jal jata sansar’ i. e.‘ If the saints would not be around, the world would be in flames.’ This truth was realised by all those who were witness to the anxiety of Pujya Bhaishri who rushed to the aid of quake-affected people immediately on receiving news from Kutch and Gujarat. For a while he even thought of postponing this katha session and rushing to help in relief activities. But then, as revealed by himself, his higher mind reasoned within himself that material and physical aid would be rendered by countless other people but who will soothe the broken hearts of these people and who will restore their faith? Of what use was all this material aid if their minds were not rebuilt again? The only way to rebuild their minds was ‘Shri Harikatha’. Hence it was decided to go ahead with this session of Shrimad Bhagwat Gnan Yagna, which equips the human mind to face confidently, all the challenges and difficulties of life.

During the katha Pujya Bhaishri emphasised that the katha was not only a means of introspection and reflection or of devotional indulgence but also of rebuilding human minds. He emphasised that when the occasion called for it, God could very well undertake and ensure reconstruction of the society as well. He also proved that serving the people and rebuilding their minds was the active manifestation of devotion put in practice. Other reputed Jain Aacharyas and saints of Swaminarayan sect also delivered inspiring sermons during the katha sessions. Popular folk singers like Shri Bhikhudan Ghadhavi and others presented folk songs at night.

During this katha Pujya Bhaishri helped Shri Hiraratan Manekji end his 411-day fast by offering him water. This event demonstrated that one could also survive only on water and energy of the sun.

The Chief Minister of Gujarat Shri Keshubhai Patel also attended the katha and assured the people that he would rebuild Gujarat very soon with the blessings of Pujya Bhaishri. He also outlined the details of service projects to be started for this purpose.

After the Katha session was concluded Pujya Bhaishri visited the quake affected areas of Bhuj, Bhachau, Kandla, Anjar, Gandhidham and surrounding villages resolving to rebuild them. The details of this project will be made available very shortly. 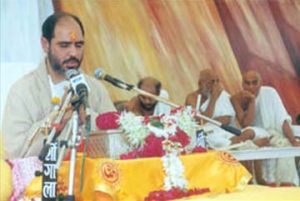