This year, under the inspiring presence of Pujya Bhaishri, Sandipani Vidyaniketan saw the successful completion of the 31st Navratri Anushthaan held from 16th October to 24th October 2012.
The morning sessions began with pooja and singing of Hanuman Chalisa by thousands of devotees. This was followed by the harmonious and devotional singing of each verse from Shri Ram Charit Manas led by Pujya Bhaishri. thereafter, everyone would join for lunch and rest for a couple of hours.
In the afternoon sessions, a divine Devi Bhagavat Katha was narrated by Pujya Shri Navalshankar Karunashankar Rajgor who enlightened everyone on the worship of Maa Shakti. Thereafter, all devotees went for darshan of the evening aarati of the deities in Shri Hari Mandir. Subsequently, Pujya Bhaishri, various saints, Rishikumars and students of Sandipani as well as other devotees performed garba with great energy and joy to worship Maa Shakti outside Shri Hari Mandir.
The main sponsor of this year’s Anushthaan was Shri Sanjaybhai Kordiya and his family from USA.
Along with devotion via the recitation of Shri Ram Charit Manas and listening to the Devi Bhagavat Katha, Pujya Bhaishri combines service to humanity by overseeing the organisation of various medical camps. As per every year, the camps were very well co-ordinated and managed by Dr. Bharat Gadhvi and Dr. Suresh Gandhi. View the brief summary on the medical camps held, the doctors involved and the service provided.
On the second day of the Anushthaan, the book ‘Parmatmani Pratiksha‘ was launched. This book is based on a 3 day discourse provided by Pujya Bhaishri on Bhishma Stuti. The books, in Hindi and Gujarati, were sponsored by Shri Dineshbhai and Darshnaben Kapadia and Shri Arvindbhai Patel from USA. Pujya Bhaishri bestowed his heart-felt blessings on the sponsors and Shri Tinaben Chandarana who oversees the writing and publication of Tatva Darshan and these books from Pujya Bhaishri’s kathas.
On completion of the last days recitation of Shri Ram Charit Manas, Pujya Bhaishri expressed his content on how the Anushthaan first begun in 1992 and has been continuing with so many people joining in. In particular, he said, “the focus of all my work is Sandipani Vidyaniketan. If one asks me, Bhaishri which is the best place in the world? I will reply…. Sandipani.”
On the tenth day, a Sunderkand Yagya was blissfully completed in the Yagya shala of Sandipani in the morning. In the afternoon, as per tradition, all set out for darshan of the hoisting of sacred flag at Dwarka.
The recitation in music of the entire Ram Charit Manas and ten minute highlights of the rest of the event including Shri Hari Mandir aarati can be viewed on you tube via the following links: 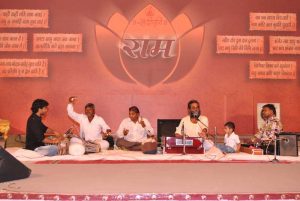 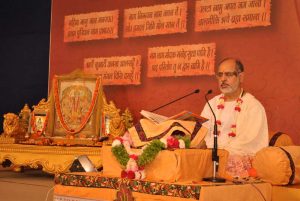 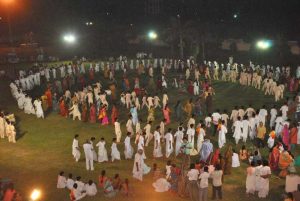 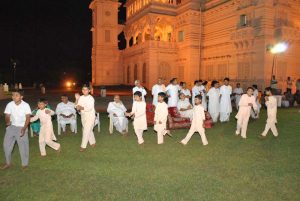 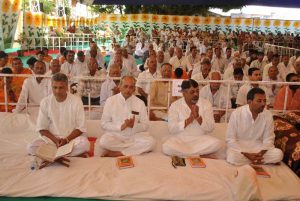 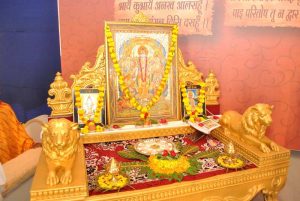 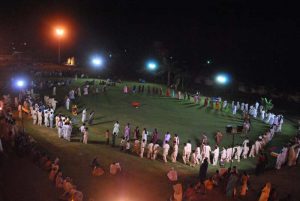 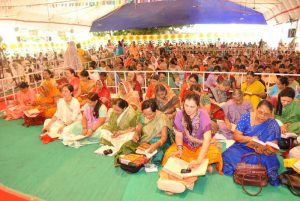 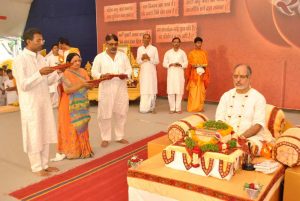 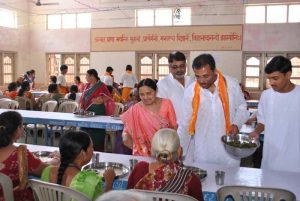 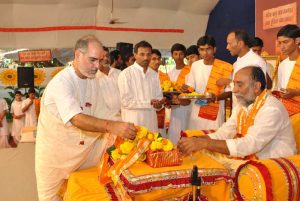 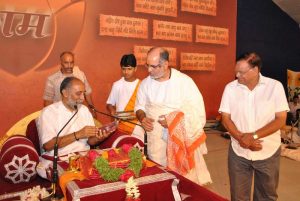