Inauguration of hostel & dining hall at Saputara School in the presence of CM of Gujarat, Anandiben Patel and Pujya Bhaishri

On 21st December 2014, a Chatrarpan (meaning: dedicated to students) function was organised at Saputara High School, Saputara, Gujarat, to inaugurate the hostel, dining hall and prayer hall by the Chief Minister of Gujarat, Anandiben Patel, in the presence of Pujya Bhaishri, the chief sponsor – Shri Bajranglal Taparia, the co-ordinator of the institute – Shri D.H. Goyani and other dignitaries.

The event began with Vedic chants and the honouring of all the dignitaries, including a welcome speech by Shri D.H. Goyani. This was followed by a speech on today’s education by Pujya Bhaishri and on the five pillars by Honourable Anandiben Patel.

Pujya Bhaishri’s speech: What should the environment in schools be like?

Pujya Bhaishri compared the process of education with that of giving shape to an earthen pot. He said that just as the process of giving shape to the earthen pot is a continuous process, similarly humans are moulded every moment of their life. Examinations do not finish just in educational institutes, true exams begin in life and people mould themselves in the exams of life. Every challenge in one’s life makes the individual stronger.

It is necessary that we get teachers trained to high quality standards in our country. He congratulated The Government of Gujarat for establishing a separate teacher’s university for this purpose. He also remembered Hon. PM N.Modi who was the CM of Gujarat at that time.

Teachers should create such an atmosphere in schools that students eagerly await the first bell signalling the beginning of their day at school instead of the last bell that brings their day at school to an end. We need an education that inspires students to come to school and attend their exams. Both the union as well as the state government are working in this direction.

There are organisations that are committed to voluntary service. Our scriptures advise us to give one tenth of our income to charity. Therefore, such voluntary organisations should adopt five to six rural schools so that quality education is available to all children.

Goyaniji has very ably taken upon himself the responsibility for the development of Saputara Secondary School and has competently delivered it. Other friends of Surat and Mumbai have also joined in this work. Cities have good schools but there is a dire need for good schools in villages. Children in villages have equal rights for good education and they need to be given opportunities through which they will uplift themselves.

Shri Bajranglal Taparia and his family have been connected with Sandipani for a long time and have been supporting all the activities, be it Sandipani, Devka or Saputara. An impressive dining hall is being dedicated here to students today. A beautiful picture of Late Shrimati Ratanmaiyya has been placed in this hall. Pujya Bhaishri fondly recalled how Ratanmaiyya affectionately sat beside him and served him food whenever he went to their house. He described Ratanmaiyya as Goddess Annapurna and said that though not visible, her soul will be present in this dining hall when food will be served to students. Pujya Bhaishri conveyed his blessings to Shri Bajrangilal Taparia, his brothers – Shri Mahavir Taparia, Shri Vishnu Rattan and their entire family.

Anandiben Patel’s speech: Five Pillars being actioned by the Government

Anandiben Patel recalled how distressing the condition of government schools was during her times as an Education Minister. I had decided right at that time that the situation should be changed for the better. I am satisfied to see that today the condition has improved greatly. Seeing Saputara Secondary School, I can say that even a city like Surat does not have such an impressive school complete with a hostel, dining hall and a modern auditorium. She expressed her deep sense of happiness that the school had been built and managed by Pujya Bhaishri’s Trust.

When the decision was taken in 2001 to allow such trusts to manage other schools it was opposed vehemently on the floor of the assembly that we had sold out everything. But today I am convinced that the decision we took at that time was correct. Our Swamiji used to come to meet me often in Gandhinagar. He had taken me around all the schools managed by his Trust. Thereafter, I had handed over the management of the Malegam School to his Trust and today we can see the good results.

I was taken by Pujya Bhaishri for the foundation laying ceremony of a hostel in Pipri. When I went to Pipri, I was made to lay the foundation for not just one but six hostels. So while travelling back I thought that it was truly a matter of great pride and delight that the donors are contributing for six hostels for students studying in schools situated in six different villages.

Anandiben Patel thereafter discussed the five fundamental issues being addressed currently by the Government. Firstly, building toilets for all households. It is a matter of great concern that our women have to wait till the night to attend nature’s call. A state like Gujarat cannot tolerate this. Within the next two and a half to three years it will be ensured that toilets are established in every household.

Secondly, malnutrition is prevalent in the present generation. Mortality has been reduced by 50% due to many schemes implemented by the Department of Health. The Government of Gujarat is continuing to work in this area.

Thirdly, saving the girl child. Today the ratio of girls to boys is 802: 1000. Every individual, family, society and the Government should be worried about this situation. People began thinking that there should not be two girls in a family. As a result, the girls had to suffer. Hence the Government of Gujarat has begun the campaign of ‘Save Girl Child’. Saints like Pujya Bhaishri and Kankeshwari Devi are also supporting this campaign.

Fourthly, the Government has been working on ‘Save and educate girl’ for the past 10 to 12 years through which the drop out ratio of girls has stabilised. The Government is also working on quality education. Health programmes undertaken in schools reveal disturbing results. Five year old kids contract diseases of the kidney and heart. Although the government is giving money for treating them the main cause of this is malnutrition.

Skill development is the fifth issue. The youth need employment. For this agriculture and animal husbandry need to be developed. People undertaking animal husbandry should be given animals for free so that agriculture develops and the youth get employment. Also, in Vibrant Gujarat, the Government of Gujarat is working towards skill development with the help of industries so that people are employed in these industries.

In the end the Hon. CM conveyed her congratulations and good wishes to the sponsor, Shri Bajrangilal Taparia and his family. She addressed the children saying that they will be receiving many blessings, their future is looking bright and advised them to study and work hard.

The event ended with Shri Gautambhai Oza delivering a thanksgiving speech to all. 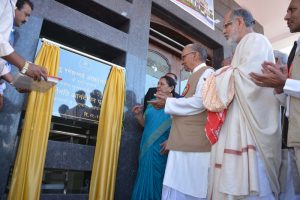 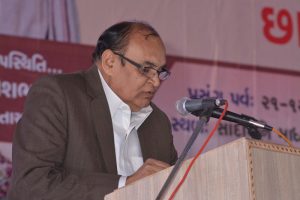 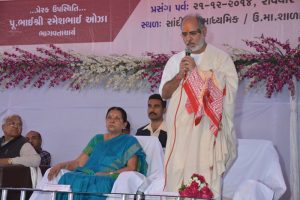 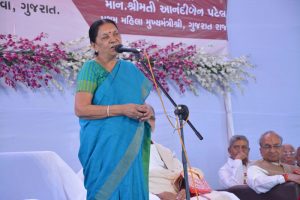 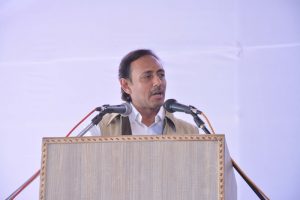