Prior to the recitation of Shri Ram Charit Manas on day 6, Pujya Bhaishri said that all tasks must be performed with enthusiasm by each individual. The recitation led into the kidnapping of Sitaji by Ravan which Pujya Bhaishri described as Lord Ram’s grace on Ravan.

On Day 7, Pujya Bhaishri said, “Our heaven is in the laps of our mother. Worshipping Maa during this Anushthan means that Maa is continuously showering her happiness on us.

Two books were released after completion of recitation on day 7 as follows: 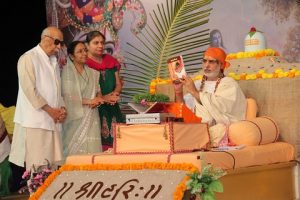 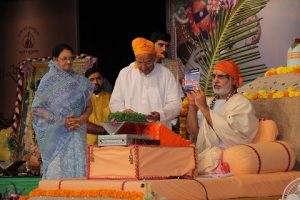 Pujya Bhaishri honoured both the sponsors and the editors, Shri Ghanshyambhai Mehta and Tina Chandarana.

On the last day of Navratri celebrations, Pujya Bhaishri announced plans to build a new guest house which several people have offered to sponsor. There are also plans to build the roads within Sandipani with cement and concrete. Furthermore, plans are in place to build a new food hall as well as an administration office.

On public demand, from Chaitra month next year, our Rishikumars will recite Shri Ram Charit Manas along with a Ram Katha in the afternoons. This will continue even if Pujya Bhaishri is not present during all the occasions. 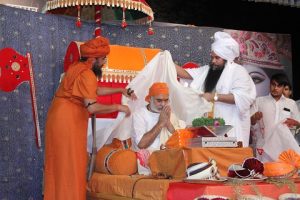 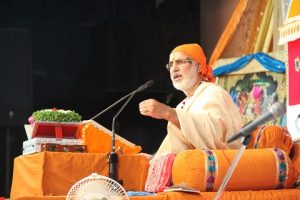 Shrimad Bhagavat Katha in the Afternoons

Swamiji said that a person automatically gains the qualities of one who they are in close association with. Rainwater is pure in the sky when it separates from the clouds but it gains the colour of soil on coming into contact with the ground and smells when fallen in a ditch. Similarly, one born with pure qualities gets influenced with modes of passion and inertia in the world. The mode of passion gives rise to hatred and liking leading to strong desires.

Shri Krishna janma was celebrated on day of the Bhagavat Katha with great joy. 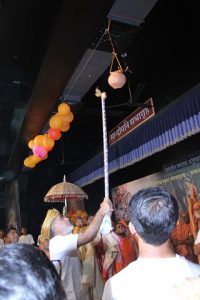 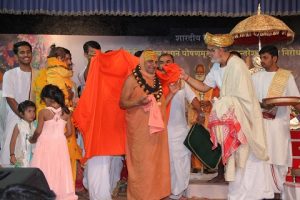 On the 8th day, the Katha in the afternoon was carried out by Shri Shyambhai Thakar, a qualified Rishikumar from Sandipani, who is now famous for Shrimad Bhagavat Katha in India and internationally. This is because of Swamiji’s heath deteriorating and was hospitalised.

In the absence of Pujya Divyanandtirthaji, his representative, Shri Gyananandtirthaji Maharaj conveyed his message and was honoured by Pujya Bhaishri on the last day of the Anushthan. 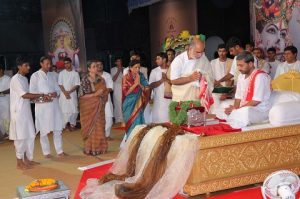 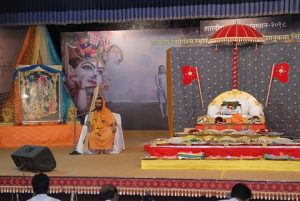 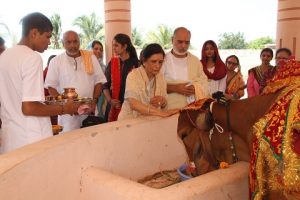 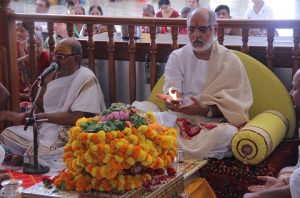 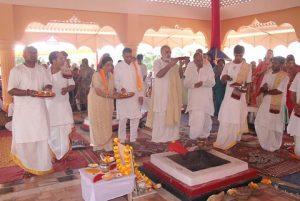 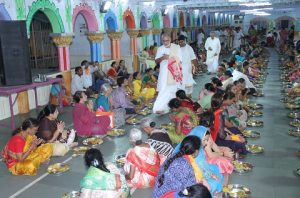 On day 6, a divine Abhishek was carried out by Pujya Bhaishri on Shri Karunamayi Maa of water and flowers as shown in the video.

The Rishikumars of Sandipani presented darshan of Gayatri Maa on the seventh day at Shri Hari Mandir.

On the 8th day, devotees were blessed with darshan of the offering of Annakut to Shri Karunamayi Maa.

Darshan from days 7 to 9 are presented below.

Navratri ended with smiles on everyones’ faces with days having passed with divine activities as well as fun. What’s more, we all heard of exciting updates to come by Pujya Bhaishri. The entire event was shown live online on Sandipani.tv and Sandipani facebook page.