This update briefs you on the enlightening talks by Pujya Bhaishri and Shri Divyanandtirthaji Maharaj as well as the exciting activities being carried out at Sandipani this Navratri which is being enjoyed by all present at Sandipani. We hope you can share this bliss with us with the updates, photos and video presented in this update.

Prior to the recitation on day 4, Pujya Bhaishri in his speech said that Shri Ram and Sita stayed together in the palace for a very short time. They were in exile for fourteen years after which Sitaji was renounced. Despite this, neither did Ramji have any complaints against Sitaji nor was Sitaji dissatisfied with Ramji. This teaches us that there must be no differences and lack of love between a husband and wife in the society.

Pujya Bhaishri fondly remembered the saints who have attended Sandipani in the past such as Shri Amardasbapu Kharawala, Sant Bhaktamali (Mayaji) who exhibited Raas leela and experimented Ram leela here at Sandipani.

Pujya Bhaishri expressed his contentment for the daily divine darshan of Shri Karunamayi Maa at Shri Hari Mandir by the Rishikumars of Sandipani.

Based on the occasion of the union of Ram and Bharat approaching in Shri Ram Chant Manas, Pujya Bhaishri said that we are performing this Anushthan so that we develop the yearning for darshan for Lord Ram like Bharatji.

Bhagavat Katha in the afternoons by Shri Divyanandtirthaji Maharaj

Shri Divyanandtirthaji Maharaj based his Katha on day 3 on the various forms of the five elements and days 4 and 5 on the third and fourth canto of Shrimad Bhagavat respectively. Some of his enlightening thoughts are presented below:

God does not bestow us with happiness or sorrow. Instead he provides us with situations through which one either feels happy or sorrowful.

Wealth without Dharma in live invites destruction. The desire for liberation is still a desire which is why Bharatji desired for devotion for God and not emancipation.

Several camps were held including: eye camp, prostheses were provided to those who required them free of charge, pulmonology camp and ear, nose and throat camp.

All those involved in the camps were honoured by Pujya Bhaishri on day 5 of the Navratri Anushthan. The camps are co-ordinated by Dr Bharat Gadhvi who has been providing his seva for many years.

On day 3, devotees enjoyed the bhajan programme by Shri Niranjanbhai Pandya. On the fourth day a drone was used to provide darshan of the garba in the gardens of Shri Hari Mandir and the magnificent lighting of Shri Hari Mandir. Many sages and saints have also been gracing these celebrations at Sandipani.

On day 4, Shri Karunamayi Maa was taken for a Nauka Vihar by Pujya Bhaishri and devotees as shown in the video clip.

Enjoy the divine darshan of Shri Karunamayi Maa for days 3,4 and 5: 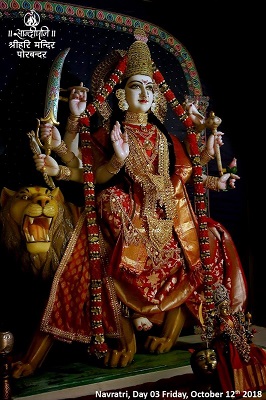 Jai shree Krishna, Thank you for the insight.It is absolutely marvellous to read & know.KEEP IT UP.LOOK FORWARD FOR MORE.THANK YOU AGAIN & GOD BLESS YOU ALL