On the third day of Navratri celebrations at Sandipani in Porbandar, along with the musical recitation of Shri Ram Charit Manas, all present continued to be inspired with the katha by Pujya Bhaishri on Bhagavat Dharma and Bapu. In addition, all were honoured to listen to the speech by honourable Shri Nagindas Sanghviji, who is 100 years old with the energy of a young person. 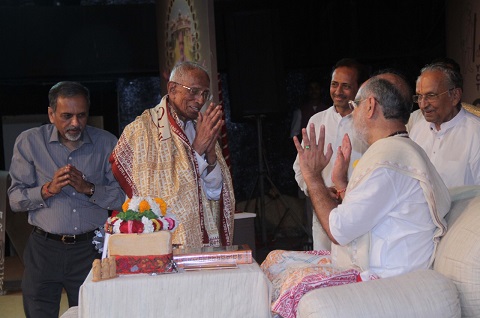 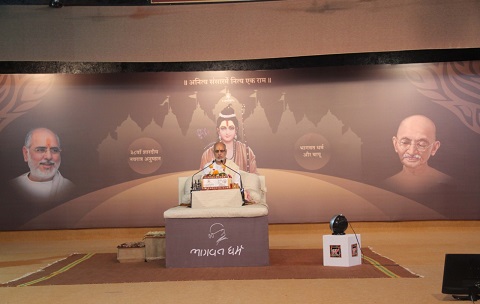 Pujya Bhaishri compared the achievements of Mohan and the aspirations of Mohandas for India, with the symbolism of a ‘golden Dwarka’ to mean a fully developed Nation. Shri Krishna is said to have lived for 125 years upon this earth and Gandhiji is said to have aspired to live for that long as well.

Given the various austerities and experiments with his health that he undertook, it is doubtful if he might have been able to. Once, when Kasturba was ill he asked her to abstain from salt and when she wasn’t able to, he took it upon himself to fast from salt and stated that vegetables did not need any additional salt in our diet.

Where did a person of his healthy appetite (he was said to be able to consume up to 22 sweet breads at one sitting!) gain the inner strength to fast so strictly?

These values were ingrained into him from his very childhood as he was nurtured in an environment that fostered practices of self-control. Watching his devout Vaishnav mother, Mohandas learned the value of fasts such as silence and ekadashi in one’s inner development early on.

Mohan and Mohandas were both two extremely unpredictable personalities! Pujya Bhaishri said that when he pays homage to Bapu he lays flat in obeisance to Baa Kasturba for how well she handled, supported and partnered a husband as difficult to handle as Bapu!

Ordinarily, wives may complain if husbands fight with them publicly but husband Mohandas was so uncompromising that not only did he fight with her on principle for accepting a gift given to her of two rupees once, but he publicly proclaimed her mistake to all in the ashram and even wrote an article on her misdeed! What a tolerant wife, indeed.

She asked Bapu once why she could not also go to jail for the cause of Satyāgraha? “Jail was a very difficult place to be”, said Bapu and he had experienced it already in South Africa so knew how torturous the situation was. Their latrines were impossible for many to handle and Bapu took on the difficult task of cleaning them.

Kasturba asked how Bapu would feel if she passed away in jail and Bapu replied that he wouldn’t wish it upon her but would feel proud that she gave up her life for a cause as honourable as Satyāgraha. Baa Kasturba did indeed pass away in jail but it was her good fortune to have Bapu by her side as she departed as they were both imprisoned at the time. Pujya Bhaishri said she must surely have wondered who would manage her difficult husband?

Pujya Bhaishri reiterated the point made by Shri Nagindas Bapu who compared Bapu to the Himalayas – majestic to behold from afar but extremely difficult terrain to actually live in. Bapu was extremely strict but like a coconut – tough on the exterior then soft within and filled with sweet water.

The Bhagavad Gita sung by Mohan on the battlefield is a source of wonder to scholars even today as they attempt to decipher its meanings and only later try to apply them to one’s life. Whilst Mohandas not only loved and lived by the Bhagavad Gita but was the very personification of many of its teachings!

From discus to spinning wheel, Pujya Bhaishri compared Mohan’s sutra in the form of the Gita and Mohandas’s suta (cotton yarn) that awakened the Swadeshi movement. One of the eleven vows, Bapu has a unique definition of ‘swadeshi’- it did not mean to not buy from England and buy within India. He intended it to mean buying whatever was locally available within a certain radius and also manufactured therein; then living with great contentment within only those means. 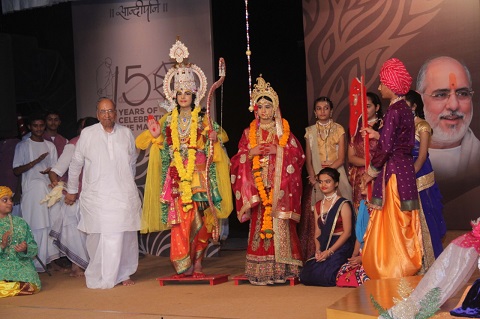 Pujya Bhaishri spoke of his own experience of how the air, water, environment and produce available locally in one’s birth land being most suitable to our physical body. Our mind and tongue may have developed other tastes, but our body doesn’t readily accept other diets and needs. Eating indigenously is a good technique to stay healthy- just as millet chapati suits Bhaishri all year around! His body doesn’t merely like it, it actually ‘needs’ it and is acclimatized to it in all seasons from childhood.

Pujya Nagindas Bapu talked on Gandhiji and societal approach in his speech.

Devotees were blessed with darshan of Shri Karunamayi Maa as a brave warrior.