Pujya Bhaishri commenced the fourth day of the Ekal Bhagavat Gyan Yagya dedicated to renunciation (arpan, tarpan and samarpan) with a celebration of the eternal nature of the values we call ‘Sanatan Dharmaʼ. Pujya Karshni Guru Sharananandji Maharaj and Shri Vaishnav Acharya Pundarik Goswamiji graced the Katha with their presence on day 4. 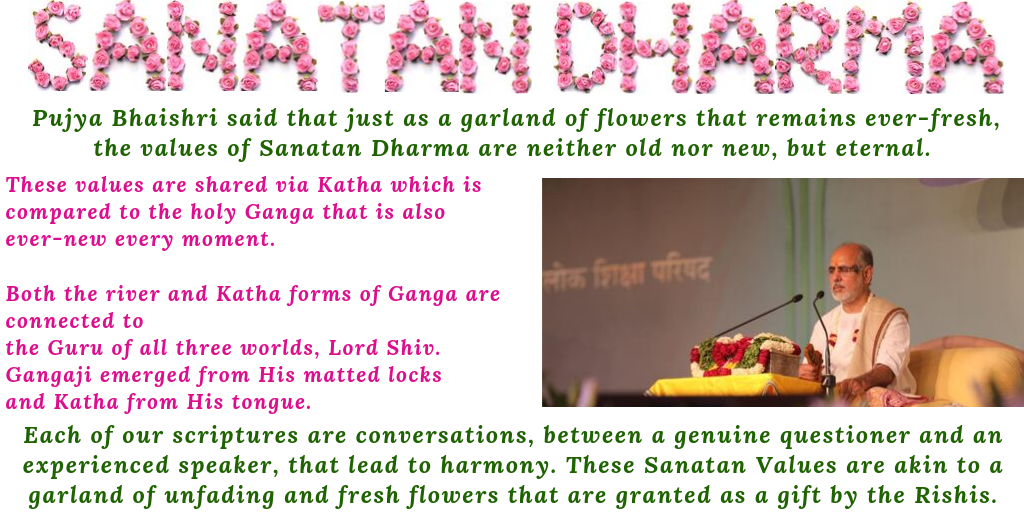 Who was the knowledge of Gita first spoken to? The Sun God, says Lord Krishna to Arjuna on the battlefield.

Who was knowledge of the Shrimad Bhagavat first spoken to? Lord Brahmaji.

The Lord, who speaks and imparts this knowledge is unborn and eternal. Not new, nor old, God is Sanatan (eternal) and so is this Katha. This is why it is so relevant even today. Whilst being ancient, it is still able to resolve most of our modern-day questions.

Prior to asking a question to an exalted soul there are four pre-requisites:

Why do we refer to Vedas as God?

What is the root of Sanatan Dharma and its entire tree of Vedic literature? The Vedas.

Vedas are the basis of all philosophies and those who disregard the Vedas as the benchmark for Truth are considered atheists.

Why do we refer to the Vedas God? Pujya Bhaishri explained the etymology of the Sanskrit word ‘Vedaʼ being based on the root vid which has three meanings-

In this way Veda means the trinity of existence, knowledge and bliss (Sat-chid-ānand). Thus, they are worshipped as God.

Bhagavan Ved Vyas recognized that not all were eligible to grasp the correct meaning of the subtle truths contained in the Vedas and thus made huge efforts to convey their essence to the masses in story-form. These are called the Purānas and Itihāsas. We can never repay the debt we owe Ved Vyasji for his efforts and thus we view Him as- 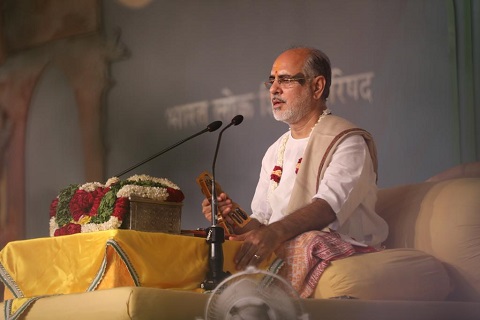 Without the purified and subtle intellect that the Gāyatri grants, one may have a downfall on the path without the correct understanding of the meaning of Vedic Mantras. Pujya Bhaishri explained this in the context of the son of the earth, Bhaumāsura who had developed demonic traits and had kidnapped 16,000 princesses.

These princesses represent the 16,000 Vedic mantras associated with the path of devotion and as Pujya Dongreji Maharaj would say, ‘One who has a downfall on the path of devotion becomes a materialistʼ. We are all sons of the earth. Without the right thinking, demonic traits may enter into us and we may also misuse Dharma to fulfil our wish for indulgences. Lord Krishna does not accept these 16,000 and honour them as Queens of Dwarka to fulfil his desires. Rather, He seeks to give a message of social reform to society through this marriage.

Let us begin with character building at school

Without the requisite development of emotional quotient (EQ) in the character building of individuals and society today, we shall not be able to progress towards peace and happiness. The development of intellectual quotient (IQ) alone will not be enough. This is the failure of our education system today that focuses only on teaching livelihood without introducing children to great personalities of history to be inspired by and inculcate qualities from.

India was enslaved by the degradation of her educational system to strip her citizens of character. If we wish to rebuild our pride in our inheritance of this culture, we must begin with character building at school! 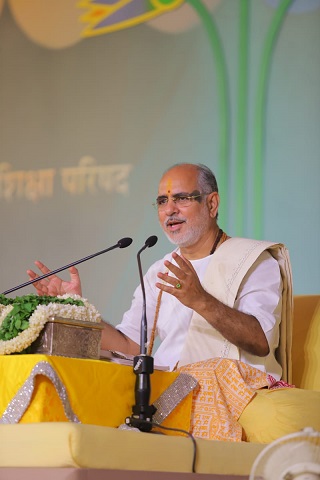 The time has come to once again be proudly Indian and to know and produce great characters once again. The spirit to learn is what keeps one young and we must seek to keep it alive in each of us because age is just a number. The day we give up learning is the day we become old. It is up to us to determine when that will be.