The Praan Pratishtha Vidhis (rituals for the consecration of the deities) began on 2nd February. The murtis of all the Gods and Godesses were brought to the yagnashala built in the complex of the Shri Hari Mandir where havan and yagnas were performed. Annadhivaas, Jalladivaas and other rituals of the Praan Pratishtha were performed on the utsav murtis (small replicas of the Gods and Godesses) by the respective yajmans. The rites and rituals of the praana pratishtha were followed strictly according to the Agamic texts performed by Priests trained in Vedic rituals to imbibe divine life and energy into the murtis.

The vidhis culminated in the final Praan Pratishtha vidhi performed during the abhijeet muhurat at 12:30 pm on 4th February. Thousands of flower petals were scattered onto the shikharas of the Mandir from a helicopter flying high above the Shri Hari Mandir. This unique and beautiful sight could be seen by people from a great distance away and announced the completion of the consecration of the deities.

Pujya Bhaishri, Gurusharanandaji Maharaj and Swami Chidanand Saraswatiji then proceeded to the roof of the temple and climbed temporary steps to the tops of each of the shikharas of the Mandir where the shikhara flags (dhwajas) were released after kalash pujan. This marked the completion of the Mandir.

Thousands thronged the Mandir to participate in these truly divine moments. However darshans of the deities was allowed only after the official opening of the Mandir at 4pm by the Honorable Vice-President of India. 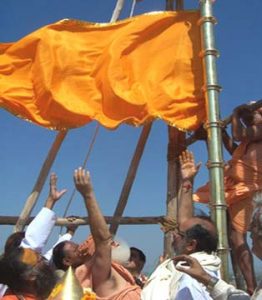 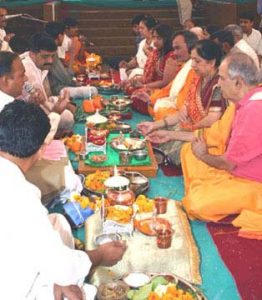 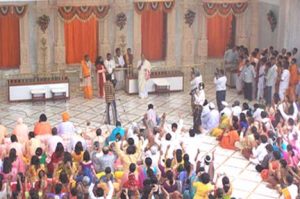