Pramukh Swamiji of the Swaminarayan sampraday, Bochanvasi Akshar Purushottam Sanstha arrived at the Sandipani Vidyaniketan at 11:30 am on 17th October, the first day of the Navratri celebrations. Manas paath had already commenced at 9 a.m. After a brief rest he was welcomed on stage and Manas paath was given vishraam. Pramukh Swamiji lit the deep and officially inaugurated the Navratri Anushthaan.

Dr. Viveksagar Swami, a Bhagwat Kathakaar of the Swaminarayan sampraday addressed Pujya Bhaishri and the audience on behalf of Pramukh Swamiji and expressed their pleasure on seeing such a spiritual atmosphere at the Sandipani Vidyaniketan. He further went on to say that they were more pleased to see Navratri being celebrated in its true spirit and meaning with Manas paath, Durgapuja along with social service. They were delighted to see how well the Sandipani Vidyaniketan had developed and the truly divine purpose it represented of spreading our rich culture all over. He also said that whenever they are travelling abroad they are aware of Pujya Bhaishri’s katha schedule. People are always talking about him and his karya.

Pramukh Swamiji also gave his blessings in a short speech and said that he had visited the Babada school long ago and had spent some time then. To see it now developed into a full-fledged institute of Rishikul tradition gave him utmost pleasure. He further said that there is no longer a need to imagine the once Rishikul tradition that existed in our country as we can see it in reality today at the Sandipani Vidyaniketan. He blessed Pujya Bhaishri and the audience and expressed his best wishes to all for the Navratri celebrations.

The Manas paath commenced once again and the trustees took Pramukh Swamiji around the entire campus. Pramukh Swamiji left the very same day for the city. Local newspapers published the above news the next day.

Pramukh Swamiji invited Pujya Bhaishri the following day for a discourse on the occasion of the pran pratishta ceremony of the Swaminarayan Temple in Porbandar. Pujya Bhaishri gave a half hour discourse. 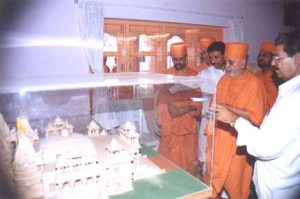 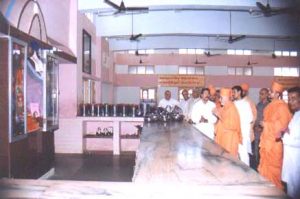