1st of February 2006 marked the auspicious beginning of the Sandipani Mandir Mahotsav with a grand Shobha Yatra which went through the streets of Porbandar culminating in a beautiful display of fireworks.

Pujya Bhaishri, Karshni Guru Sharnanandji Maharaj, Pujya Chidanand Sarawatiji and other saints performed puja at the Sudama Mandir in Porbandar, paid their obeisance at the Kirti Mandir from where the Shobha Yatra began.

The Shobha Yatra was one of its kind; Rangoli artists from Maharashtra kept doing Rangoli in front of the Shobha Yatra as it passed through the streets, more than a thousand ladies carried the Bhagavat Pothis on their heads in front of the procession, the famous Meher dandiya raas mandali of Porbandar danced in their colourful attire, a kirtan mandali sang and danced and thousands of people thronged the streets watching the Shobha Yatra pass and thousands joined the yatra too.

Pujya Bhaishri and other saints sat in huge floats greeting the people on the streets and blessing them. Other floats depicting Sandipani Vidyaniketan, Shri Hari Mandir, Kirti Mandir, Porbandar, Arya Kanya Gurukul followed behind the saints. Our Rishikumars of Sandipani Vidyaniketan and thousands of devotees who had come from all over the world to attend the Mahotsav sang and danced kirtans not able to contain their joy and excitement. The entire Shobha Yatra was 2.5 kms long.

It culminated after three hours at the HGM ground. Pujya Bhaishri addressed an audience of more than 40,000 people followed by a 45 minute display of fireworks. All watched enthralled and the enthusiasm of all was apparent. 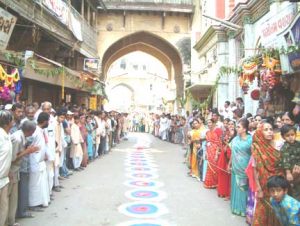 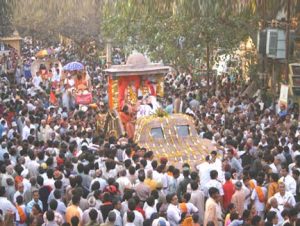