Floods devastated the city of Surat and like many people and organizations Shri Bharatiya Sanskruti Samvardhak Trust presided by Pujya Bhaishri too rushed to help the flood victims of Surat.

5000 food packets from Porbandar and Ahemdabad were sent to Surat immediately after which Pujya Bhaishri himself visited Surat and went around the city reviewing the devastation caused due to the floods. Members of the Vaishvik Sanskruti Parivar immediately came into action and clean drinking water and food packets worth Rs. 7 lacs along with necessary grocery items were distributed to the people in the city. 3000 clothes for children, boys, girls mean and women were also distributed amongst the people. Rs. 51,000 was also given to the Janmabhoomi Relief Fund, the famous publication group which was doing very good relief work.

Pujya Bhaishri also met with press reporters in Surat. He said, “Surat has always been called ‘Lehari lala’ people here are always merry. Surat had become a beautiful city in the last 10 years. Now due to the floods its become dirty but I have full confidence that the government, administrative officers and the people of this city will very soon restore its beauty.” 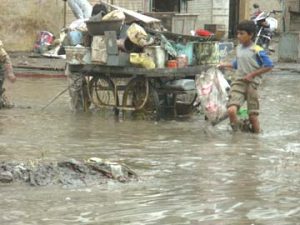