Shri Bhairon Singhji Shekhawat, Vice-President of India and Shri Narendra Modi Chief Minister of Gujarat arrived at Sandipani Vidyaniketan at 4.00pm on the 4th of Februray 2006. After revealing a commemorative plaque, they were led by Pujya Bhaishri up 48 steps to the entrance of the Mandir. Inside, they lit the lamp officially inaugurating the temple, after which they did darshanof the praan pratishthit deities.

Following this, the special guests were escorted into a large marquee, eagerly awaited by over 50,000 devotees who have flocked from all parts of India and abroad to attend the event.

The program began with the National Anthym followed by Veda Ghosh by the Rishikumars of Sandipani Vidyaniketan and a Raas performance by the Meher Raas Mandali of Porbandar.

The guests gave their messages of support and good wishes for the new Mandir and praised Bhaishri for his vision and effort in creating a new monument for the country.

In her message, Shrimati Kokilaben Ambani welcomed all and remembered her late husband Shri Dhirubhai Ambani and said he was a man who had balanced spirituality and work-ethics in a good manner. She added that Bhaishri had worked in a similar manner and completed the grand Shri Hari Mandir project.

Pujya Bhaishri in his speech expressed his pleasure at the completion and opening of Shri Hari Mandir. He further outlined the details of Sandipani Mandir Mahotsav and thanked the saints and dignitaries for the blessings and support respectively.

Shri Narendra Modi expressed the two very pertinent issues that he felt were being faced by the Indian sub-continent and the entire world – terrorism and environment. He expressed that differences are being created between rich and poor and religion. He cited the example of Lord Krishna and his dear friend Sudama whence the poor Sudama was so fondly greeted by Lord Krishna who washed the feet of Sudama and drank its water. He said this is our culture where we not only do not feel any difference between the rich and poor but also believe in existing together in harmony and without any dejection.

He further said, “Hinduism, the mainstream religion of India, has accepted all the other religions in equality and proved its commitment to secularism. The Hindu religion has never advocated any sort of conversion into its fold to any other person following any other religion. Such rich is our culture which is being followed since ages.”

Mr. Modi said that the sense of concern and protection to our environment has been built in our culture and way of life. He cited the cultural example of a mother teaching his child to beg forgiveness daily morning to the Mother Earth for having put his feet on the Mother Earth. He further said whenever we make excavations or construct buildings, at the end of which we conduct a prayer yagna of shanti paath which begs for forgiveness from the Mother Earth and reaffirms the commitment for the protection of the environment.

Mr. Modi expressed profusely that he foresees Sandipani Vidyaniketan will propagate the relation of Science with Religion and will find their roots of dependence in each other.

Shri Bhairon Singhji attended the function in spite of his ill health and expressed that it would have been a great mistake and created a void in his life had he not come to Sandipani Vidyaniketan to inaugurate and officially throw the gates open of the Shri Hari Mandir. He was overwhelmed by the arrangements on the Sandipani campus and saw the Indian culture alive in its totality in its periphery.

He talked of the depiction of science in our religion and, referring to the war between Rama and Ravana he asked whether the arrows of their time are the missiles of today? Or whether the Pushpak Vimaan of their time is the helicopters and aeroplanes of today? Thus, he encouraged the audience to investigate further the relation between modern science and our religion.

All the dignitaries agreed that due to presence of the Shri Hari Mandir, Porbandar had also become a place of pilgrimage along with Somnath and Dwarka.

A commemorative souvenir book to mark the auspicious event ‘Shri Hari Mandir and the Glory of Hindu Temples’ was released at the function by Shri Bhairon Singhji and Shri Narendra Modi.

Shri Mohanbhai Patel, Chairman of the Sandipani Mandir Mahotsav Organising Committee gave the vote of thanks. The program concluded with the National Anthym. 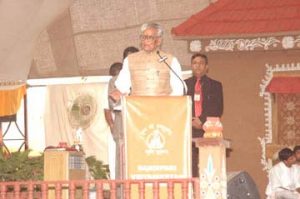 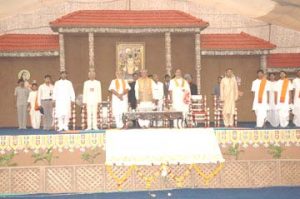 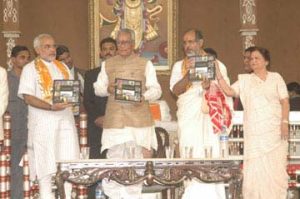 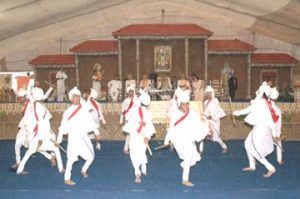 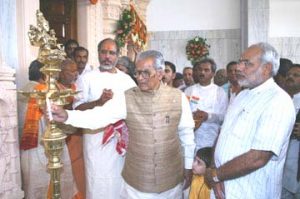 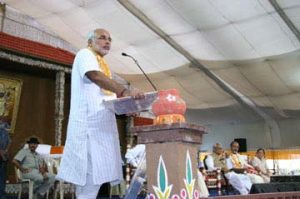 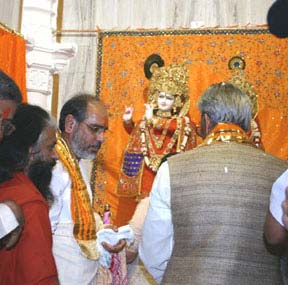 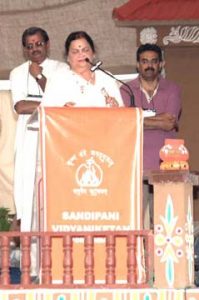