The 20th Navratri Anushthan celebrated with great fervour and devotion

A gathering of immense spiritual and emotional significance for the members of Sanskruti Parivar took place on the campus of Sandipani Vidyaniketan, Porbandar between 17th Oct. and 26th Oct. 2001. The nine days of Navratri, the festival of worshipping the Supreme Divine Mother, became an experience of veritable spiritual rejuvenation for the blessed participants who accompanied Pujya Bhaishri in his Anushthan.

This unique anushthan comprised of two main sessions, collective upaasana or worship during the day and a session of garba and bhajan at night. In the morning session lasting from 8 a.m. to 1 p.m. collective recitation of Ramacharitmanas was undertaken while the afternoon session comprised of the narration of Devi Bhagwatam by Pujya Bhagwatanandji of Rishikesh and satsangs of other reputed and spiritually accomplished saints.

The Navratri anushthan began with lighting of the auspicious lamp by Pujya Pramuhkswami, the head of BAPS Swaminarayan sect, who graced the occasion in spite of his very busy schedule of socio spiritual activities spread around the world. In his speech following the inauguration of the function he said ‘We only read the descriptions of the ashrams of ancient rishis in our scriptures, but here at this Sandipani Vidyaniketan, we get first hand experience of the atmosphere that must have prevailed in those ancient hermitages. I am greatly pleased to visit this institute, which is rendering a great service in preserving the spiritually rich and serene atmosphere of our ancient ashrams. This noble and uplifting endeavour of Bhaiji deserves our fulsome praise, especially in view of the various undesirable influences that have crept in the celebration of this divine festival in recent times. All of you who are participating in this unique anusthan are very fortunate and deserve to be commended. I also congratulate Bhai and commend his noble undertakings.’

Pujya Bhaishri in his address expressed his feelings of joy and gratitude towards Pramukhswami for gracing the occasion. Paying glowing tribute to the innumerable activities initiated by Pujya Pramukhswami he said that today when the world is on the verge of third world war, with countries battling it out with arms and ammunitions, thousands of saints inspired by Pramukhswami are spreading the message of love and service in lieu of violence throughout the world.

All participants of the anushthan coming from various parts of the world enthusiastically joined the Rishikumars and members of the trustee mandal in the Pothi Yatra of Devi Bhagwat, which was organized on 17th Oct. 2001.

The afternoon sessions of Sant Samagam began with the collective chantings of Veda mantras by the Rishikumars followed by their singing of hymns and bhajans. The spirited sankirtans of sannyasis from Uttar Pradesh, a prominent state in India who accompanied Pujya Bhagwatanandji enhanced the intensity of the spiritual atmosphere. Apart from Pujya Bhagwatanandji the chief speaker on Devi Bhagwat, other saints who delivered their enlightening speeches in the Sant Samagams included Pujya Deviprasad Maharaj, Pujya Muniji Maharaj, young Kathakar Shri Kanhaiyalal, etc.

On 26th Oct. 2001, the concluding day of Pujya Bhaishri’s twentieth Navratri Anushthan a Homatmak Yagya of Sunder Kanda was performed.

In the tradition of service with devotion of Sanskruti Parivar, various medical camps were also organized during the Navratri Anushthan. The details of these camps are as follows.

EYE CAMP WITH CATARACT OPERATIONS: On 19th Oct. about 110 patients were checked for eye problems by a team of eye specialists of Shivanand Mission’s Eye Hospital. 90 of them were treated on the spot while 18 patients were taken to Veernagar Hospital for cataract operations.

POLIO OPERATION CAMP: About 27 patients were operated for polio related problems in the Thakrar Hospital of Porbandar starting from 20th Oct. 2001. Dr. Punatar and Dr. Bhalia conducted these operations. Callipers were also distributed to the patients.

LEPROSY REMOVAL SURVEY & SKIN CAMP: members of Sanskruti Parivar, Vadodara, organized a survey for detection of leprosy and skin camp. On 22nd Oct. patients who have been cured of leprosy by the efforts of Sanskruti Parivar, Vadodara under the leadership and guidance of Shri Purushottambhai Panchal, were honoured by Pujya Bhaishri and provided with various equipments such as sewing machine, hand cart, glass cabins, cycles, etc. to enable them to lead a normal life independently. The Hira Bhana family of New Zealand sponsored all above projects.

SAD DEMISE OF SHRI RAMANBHAI PATEL: Shri Ramanbhai Patel of USA who had come to participate in the Navratri Anushthan inspite of his having endured three heart attacks, succumbed to the fourth attack on the night of 22nd – 23rd Oct. while chanting Ram nam. He was cremated in the presence of saints who blessed him and prayed for his salvation. Pujya Bhaishri dedicated this year’s recitation of Ramacharitmanas to this noble soul.

DHWAJAROHAN OF DWARIKA JAGAT MANDIR: On the evening of Vijaya Dashami 26th Oct., the function of Dhwajarohan in the Dwarika Jagatmandir was accomplished amidst chanting of Veda mantras. Shri Bajranglalji Taparia was the Manorathi of this Dhwajarohan. Almost all participants of the Navratri anushthan congregated from various parts of the world and witnessed this holy occasion with deep devotion. 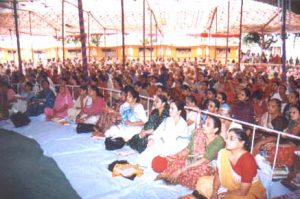