Following the annual tradition, celebrations on a grand scale were arranged at the Sandipani Vidyaniketan to celebrate the divine religious occasion of Shaaradeeya Navratri from 23rd September to 1st October, 2006. Pujya Bhaishri and other saints graced the occasion by specially attending these celebrations and providing inspiration and guidance. Shri Sureshbhai and Urvashiben Patel was the host of these celebrations.

As is the practice at Sandipani, the devotees and Pujya Bhaishri recited aloud the Ramcharitmanas to the accompaniment of music. The festival was conducted in two sessions. In the first session Ramcharitmanas was recited while in the second session Pujya Mamaji of Baksar narrated various dramatic events of Ramayan and their visual presentations were staged by accomplished Ramleela aristes. The sequence of the events staged through the nine days of Navratri was:

Along with these religious programmes various medical camps were also arranged. Vaidya Shri Labhshankar Shukla offered his services for the Dental Camp on all nine days. A total of 809 people with various dental problems took benefit of this camp. Acupressure camp was held from 24th to 28th in which Mumbai’s famous acupressure expert Dr. Navaneetbhai Shah offered his services. On the 27th an eye camp was arranged. Patients who needed an eye operation were taken to Veeranagar for surgery. From 24th to 28th a Physiotherapy camp was also organized in which Dr. Himaben Patel provided her expert services. Certain medical camps were arranged at the Lion’s Club such as the ENT camp of Dr. Nandlal Mansetta of Ahmedabad; Hormones and Diabetes camp of Dr. Vivek Arya of Ahmedabad, Oral Care camp of Dr. Shyam Sheth, etc.

Akhand sankritan i.e. non-stop singing of Rama-dhun was undertaken throughout the Navratri Anushthan. Continuous chanting of Harinaam was also taken up from 23rd September to 2nd October in which Bhajan mandlis from 32 different villages of Gujarat came and sang bhajans. The programme of Dhwajarohan of the Shri Hari Mandir continued all through the Navaratri. In the mornings the host family performed the pujan of the Dhwaja and hoisted it. In the evenings they performed Satyanarayan puja and katha.

The family of Shri Sureshbhai Patel and Shrimati Urvashiben Patel of California offered 500 kilos of laddus to Lord Hanuman and distributed it amongst the devotees as prasad.

Adequate bus services had been arranged for the devotees coming to Porbandar. A bus was available every half an hour all through the day. Food arrangements were also made for the visitors. All arrangements were free of charge. Numerous people availed of these facilities.

Along with the recitation of Ramacharitmanas, recitation of Shatchandi Path was also undertaken, and on the final day a ritual yajnya was performed. On Dassehra a homatmak yajnya of Sunderkaand was performed with all rituals and worship. During the same period Pujya Bhaishri also inaugurated the main gate of Shri Hari Mandir.

Thus, the Silver Jubilee celebrations of Navaratri Anushthan and the recitation of Ramacharitmanas were concluded at the holy place of Sandipani Vidyaniketan in the inspiring presence of Pujya Bhaishri.

On the 2nd of October, like every year all went to do darshan of Shri Dwarkadeesh. 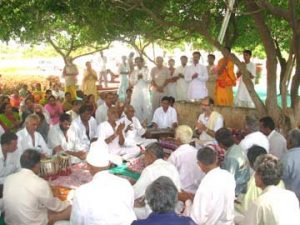 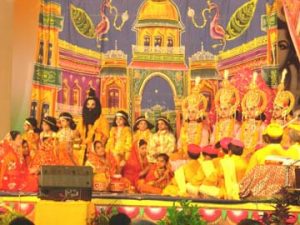 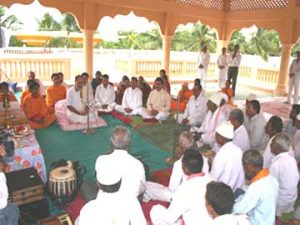 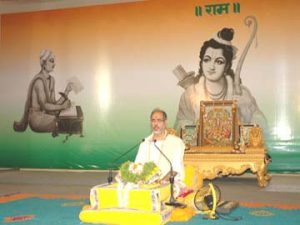