Today, when everyone is ever so busy in the senseless pursuit of worldly goals, it is very difficult to find a true saint who can lead us to the path of God realization, and though, we may know of a few such real saints, it requires sheer luck to be able to spend some time in their company and listen to their profound wisdom.

Foremost amongst these few true saints known to us today, is Pujya Bhaishri, Param Pujya Shri Rameshbhai Oza whose Bhagwat katha session was organized at Ranchi from 13th April 2002 to 21st April 2002. This Katha session was hosted by the Satsang Samiti comprising of Sarvashri Bhanuprakashji Jalan, Narayanji Jalan, Vishnuprasadji Lohia and others. The Katha began on the first day with the shobhayatra of the pothiji which set out from the Laxminarayan temple. Though the daily sessions were scheduled between 9.00a.m. to 2.00p.m. it would very often extend upto 3.00 p.m. due to the keen interest displayed by the large number of people coming to hear the Lord’s divine leela.

In the evenings Pujya Bhaishri held satsangs at the residence of Shri Narayanji where bhajans and bhakti geet were sung. Pujya Bhaishri also visited the temple of Pahadibaba to have darshan of Lord Shiva. He also performed a Shodashopachar puja in the temple.

Words of wisdom from Pujya Bhaiji. He said, “We all know that the aim of katha is not mere entertainment, but intended to initiate introspection, churn our psychic being and lead us onto the path of a Godly life.” Pujya Bhaishri also laid emphasis on the humanitarian values that could bring about stability in our modern life which otherwise appears to be heading towards total disintegration of society. 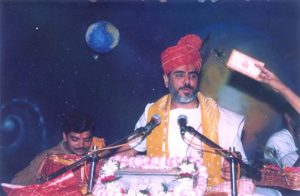 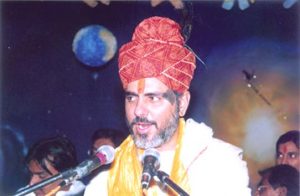