A tribute was paid today, on 11th May, at Sandipani Vidyanikenan to Late Pujya Laxmiba (Pujya Bhaishri’s mother) on her second death anniversary.

Pujya Bhaishri’s brother, Shri Gautam bhai Oza and his family first performed the worship rituals of hoisting of the divine flags atop Shri Hari Mandir. Thereafter, all present recited the verses from chapter 15 of Bhagavad Gita followed by the singing of God’s name.

Remembering Pujya Baa, Shri Gautambhai said in his speech that whenever Pujya Baa was in Sandipani, she would walk everywhere without any footwear. She would sit in front of the Vyas pith in any Katha or Anushthan at Sandipani; for example, the Katha during the Mandir Mahotsav in 2006 by Pujya Bhaishri and Katha by Pujya Moraribapu in 2013.

Being the occasion of Ganga Saptami today, he narrated the Katha of this occasion and said, “Just like Lord Vaman established Gangaji as a river from his stoup, similarly may the energy of all mothers in the form of Maa Ganga, make us pious. We bow to the divinity of Pujya Baa and gain blessings.

The trustees of Sandipani, principals and teachers of Sandipani, guests and Rishikumars paid their respects to Pujya Baa. At the end, the flags were raised amidst the singing of God’s name atop Shri Hari Mandir by Shri Gautambhai Oza and family. 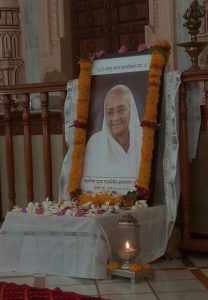 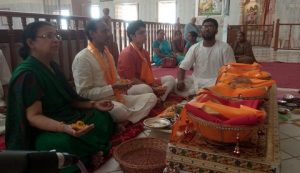 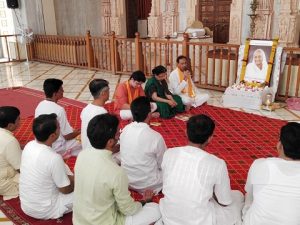 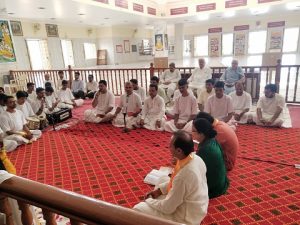