Life is simple but a human being is difficult. Experiencing God is the simplest thing but the difficult human has presented it to be complicated. When I talk of God, I am implying life. You cannot separate the Supreme Existence from life.

I always say that experiencing God is the easiest thing. All you need to experience God is to be simple. On the contrary, being simple is the most difficult thing.

Pujya Dongreji Bapu used to say that Ram is simple, His name and work are simple. Hence people troubled Him. However, His self-management was such that He was not troubled. Hence Lord Ram was worshipped.

Why have humans become difficult? This is because they do not know how to self-manage.

They have been unsuccessful in managing the self. On being unsuccessful, they get more entangled in the issue such that their further efforts in trying to resolve with their intellect makes the situation worse. One became more and more confused and difficult.

One can slowly learn to interpret as well as understand Gita and Ramayan through practice, reading the deduction by others and listening to saints. However, no one can understand man. Why? Man is not in the control of oneself. The biggest barrier to human is human!

Sorrow is the result of our own earnings. How hard does one work to earn sorrow! The root cause of sorrow is the lack of self-control and self-management. 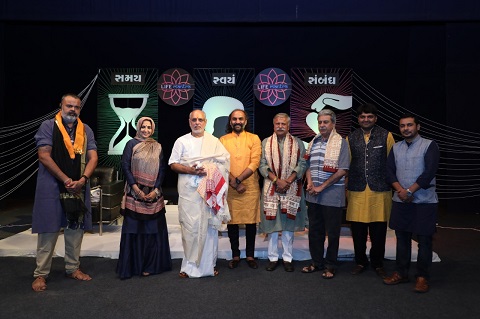 Most of the time, we live in reaction. Living in reaction means living in slavery and therefore lack of independence.

Normally, we become a self-appointed judge when it is the fault of others whilst we become a lawyer when it is our fault. In spirituality, one must become a judge of oneself, especially when talking of self-management.

I heard this story from Pujya Morari Bapu some years ago:

A sage was bathing in a river. On the bay, a dhobi was slapping clothes on the floor as he washed them. As the sage came out of the river, the dirty water splashed on him. The sage requested the dhobi to wait while he came out. The dhobi replied, “If I wait for sages like you coming in and out of the river, I will never finish washing this pile of clothes”. The sage said nothing and went back into the river to bathe again. Once again he came out and tried to escape but the dirty water splashed on him. The sage pleaded to the dhobi again.

Lord Vishnu and Maa Laxmi had been watching this from Vaikunth. Lord Vishnu stood up in anger. Laxmiji asked, “Where are you off to?” Vishnuji replied, “What does the dhobi think of himself troubling my sage?”

By now the sage was coming out of the river the fifth time and pleaded to the dhobi. The dhobi began to swear to the sage. In return, the sage did the same.

Lord Vishnu turned back. Laxmiji asked, “What happened?” Lord Vishnu replied, “Both turned out to be the same. They are as bad as each other.” 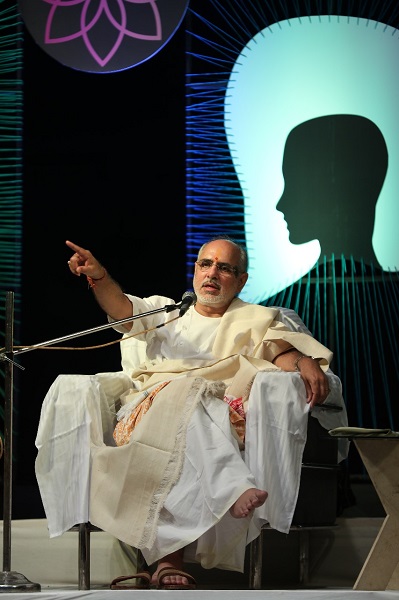 Thus we need to reflect on ourselves rather than judge others. I always say that every katha moulds a katha narrator. A katha narrator’s thoughts and speech work like a hammer and nail to mould oneself in the light of Ramayan and Bhagavat. This leads to an ideal human.

Learn self-management and how to mould oneself by listening to a katha. Should you learn this, it is bliss everywhere and all the time. There will be no sorrow. Whilst fighting darkness, time will end but one will not win. Our entire effort should be to light a lamp which will remove years of darkness. This is what spirituality is all about.

Just like we calculate how much time we spend on relationships, perform this calculation of your breaths: how many have you taken, for what purpose, for whom? etc. With money, as you spend, you will earn. Whereas with your breaths, you are only spending. You will not earn back the breaths you have spent.

Do not live in reaction. Self-control is the solution to managing the self, time and relationship.